University Democrats gets to know House District 49 candidates before endorsement 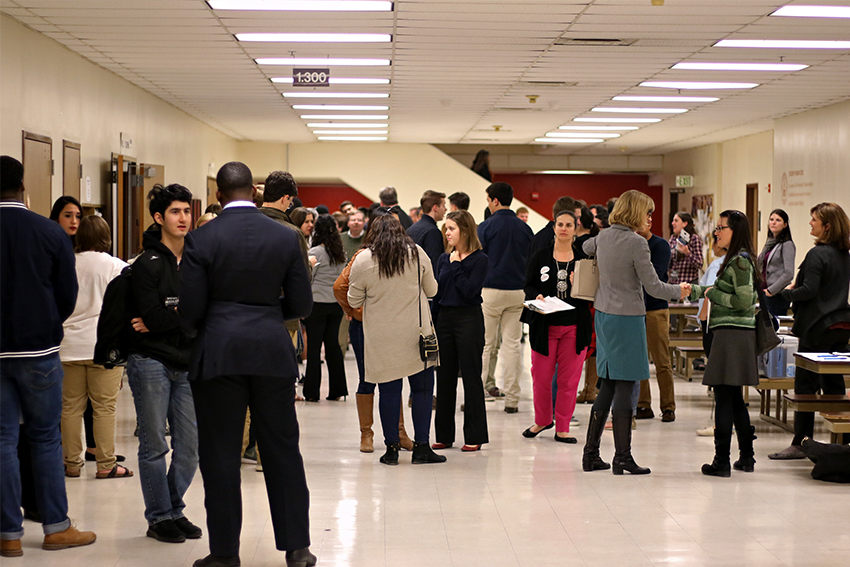 University Democrats had its first glimpse at candidates vying to represent it in an open state House seat Wednesday before the group makes an endorsement in the coming weeks.

Way said she believes her platform — which includes providing more affordable housing, getting guns off campuses, legalizing marijuana and funding higher education — will resonate with students throughout campus.

“There’s been a 26 percent drop in investment in higher education since 2008 and tuition is on the rise,” Way said. “Nationally, student debt is at an all-time high at over $1 trillion, and that’s unacceptable. We have to be investing in students to ensure that they have the opportunity for an affordable, quality education.”

Fischer, a 2014 UT graduate, said he is running as the student choice who can actively push for student debt relief and fight against guns on campuses.

“We need somebody to sort of push back against those sort of attitudes at the Capitol, and nobody is really listening to us from either party,” Fischer said. “This is our opportunity for youth representation, and we’re going to seize it.”

Nora Martinez, government and Hispanic studies senior, said she is leaning towards endorsing Huey, but plans to endorse a candidate who is honest and who has experience working with the legislature.

“I am really interested in Huey because he’s in contact with all of us,” Martinez said. “I feel like it’s important to have a vision for what we want in the legislature.”

On Feb. 7, after hearing positions and stances on issues from all candidates running in local races, UDems will meet separately with Central Austin Democrats so the organizations can decide on endorsements. If both groups end up endorsing the same candidate, then he or she will have the backing of the Austin Progressive Coalition, which carries a lot of weight in local Democratic politics.

“It’s big because we’re a coalition that will be active in the community for you,” government senior Maliha Mazhar said. “We’ll spend money, we’ll volunteer, we’ll blockwalk and we’ll phone bank for you.”

Attorney Aspen Dunaway, former NARAL Pro-Choice Texas counsel Blake Rocap and attorney Matt Shrum were not in attendance during the meeting. The seven candidates are all running for longtime Democratic state Rep. Elliott Naishtat’s seat after he decided not to seek re-election back in December.

Although she won’t be able to attend the endorsement meeting and candidate forum, biochemistry freshman Renee Raines, who is still undecided, said she wants a representative who will take progressive stances on immigration, the death penalty and lowering student debt.

“I really like the candidates who are focused on the students and come out to these meetings. It really shows that they are interested in the young community, which is important in getting those votes,” Rains said. “It’s really important in politics for candidates to be really straightforward and honest with the people they’re representing, so that’s a big thing for me.”