Strong first half lifts Longhorns to 72-58 win over Vanderbilt 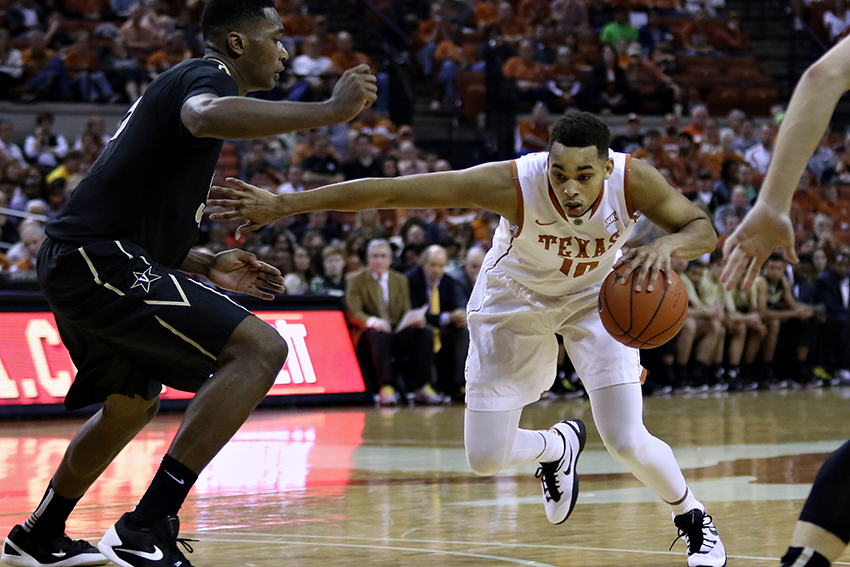 The wake-up call came early for the Longhorns Saturday morning.

But Texas showed no signs of grogginess against the Commodores, jumping out to a 15-point first-half lead en route to a 72-58 win in the Big 12/SEC Challenge.

“We needed to win breakfast,” head coach Shaka Smart said. “I thought they did a nice job of coming in with the level of excitement and energy.”

Offensively, the Longhorns struggled to start the game, missing their first six shots from the field; however, the defensive intensity kept the Commodores off the scoreboard as well.

Texas finally broke out of a shell five minutes in. A thunderous dunk by senior center Prince Ibeh sparked a Longhorn run that saw senior forward Connor Lammert and freshman guards Eric Davis Jr. and Kerwin Roach Jr. combine for eight points, putting them up 14-3 nine minutes into the game.

The last four points came off of steals and easy dunks for Roach, something he said they saw in the scouting report.

“I just recognized the plays they were running,” Roach said.

The Commodores eventually trimmed the Longhorns’ lead to six, but Texas responded immediately with an 11-3 run to close out the half with a 31-16 lead.

Vanderbilt, however, woke up in the second half.

The Commodores opened the half with a 3-pointer — their first of the game — and quickly cut the deficit to eight points, the lowest it had been since 5:54 in the first half. Junior center Damian Jones and sophomore guard Matthew Fisher-Davis combined to score 32 of Vanderbilt’s 42 second-half points.

But the Longhorns had an answer for every Commodore run. Eight times Vanderbilt cut the deficit to single digits and all eight times Texas responded by pushing the lead back to double digits; however, Smart said he wants this team to stop playing the scoreboard.

“I thought our guys had poise tonight, but our intensity needs to continue to rise,” Smart said. “That’s a make-up thing that we have to continue to develop as a team.”

But Ibeh wasn’t the only offensive star for the Longhorns. Roach posted a team-high 15 points, while junior guard Isaiah Taylor and freshman guard Eric Davis added 11 and 13 points, respectively.

Taylor said the guards made it a point to come out attacking the lane.

“Coach Smart told us before the game to just run and attack,” Taylor said.

The Longhorns now re-enter Big 12 play with their toughest games still ahead of them. Three of Texas’ next four games come on the road against ranked teams, starting with No. 17 Baylor on Monday.

But Smart’s excited for his team to get the challenge of playing seven ranked teams in its final 10 games.

“I think they’re opportunities,” Smart said. “My college coach had a famous saying and he said it all the time: ‘It’s too late to cancel.’ We’re going to play those games.”