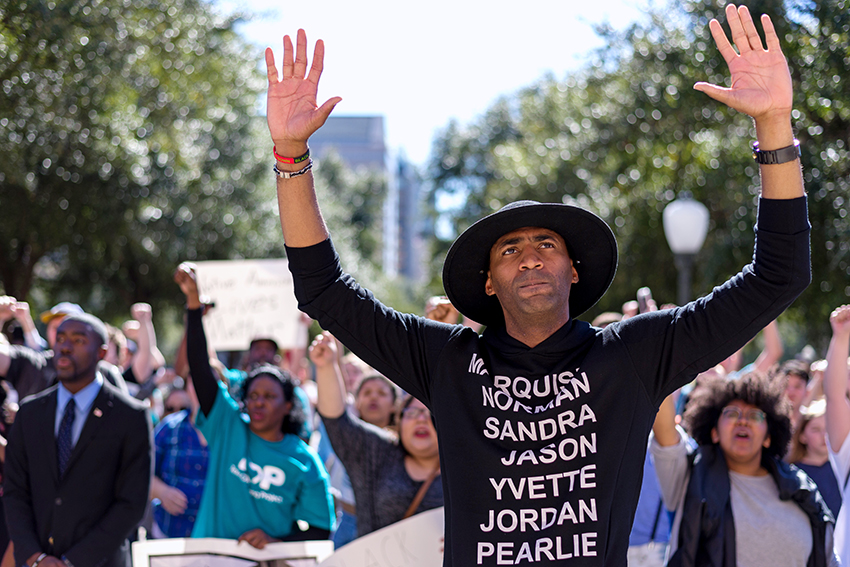 A young black man asked this question to the five Democrats running for president in the first of six debates on Oct. 13, 2015 in an effort to force presidential candidates to address issues of police brutality, criminal justice reform and drug decriminalization — all focuses of the Black Lives Matter movement. Since then, activists around the country and in Austin have forced other candidates for office to take a stance on race-related issues.

On Saturday afternoon, a crowd of more than 100 local activists and students gathered for Millions March Texas 2016 at the Martin Luther King Jr. statue. Rally participants listened to speeches in the shade of the MLK statue before heading to the Capitol to hear from speakers on how they could affect change in not only the presidential primary, but also in local races.

“We need to continue to lobby our congressmen, our legislators, our council members,” said local activist Juanita Spears, who spoke in front of the statue. “If we put them in there and they don’t do what they need to do, then the next time we’ll vote them out.”

While the Black Lives Matter movement has been effective at making some presidential candidates, mainly Democrats, address its concerns, activists at the rally argued candidates need to quit talking about platforms and actually begin taking action.

“I’m turned off completely. It’s like a big show,” said Jasmine Murray, a sociology and anthropology junior. “It seems like they don’t really care about us as a society, they care about their own political agendas.”

In the Republican primary, candidates such as retired neurosurgeon Ben Carson have argued that the lives of no one race matter more than the lives of other races.

Bailey Alders, who was walking around the Capitol around the time of the rally, briefly interrupted the rally by yelling “All Lives Matter.”

“I believe there’s a sanctity to life,” Alders said. “I’m as supportive of them as anybody else in the world, but I just get tired of the divisiveness … and for the future to be embraced, there’s some things in the past that need to be left in the past.”

Speakers recited a long list of lives lost in connection with police violence in the past couple of years, including Freddie Gray, Sandra Bland, Tamir Rice and Larry Jackson Jr.

Local activist Stevens Orozco, who spoke at the rally, said activists need to unite together and use the recent deaths as a motivating force for action.

“People’s lives are on the line,” Orozco said. “The time for being timid has passed. We have to connect, we have to be straightforward with each other, we have to be passionate.”

Many activists focused on the large amount of children and youth scattered throughout the crowd and how they are fighting for their futures as well as their own.

“When it comes to our future and other generations besides myself, yeah, I’m going to show up,” Murray said. “No matter how hard it is for me to get there.”