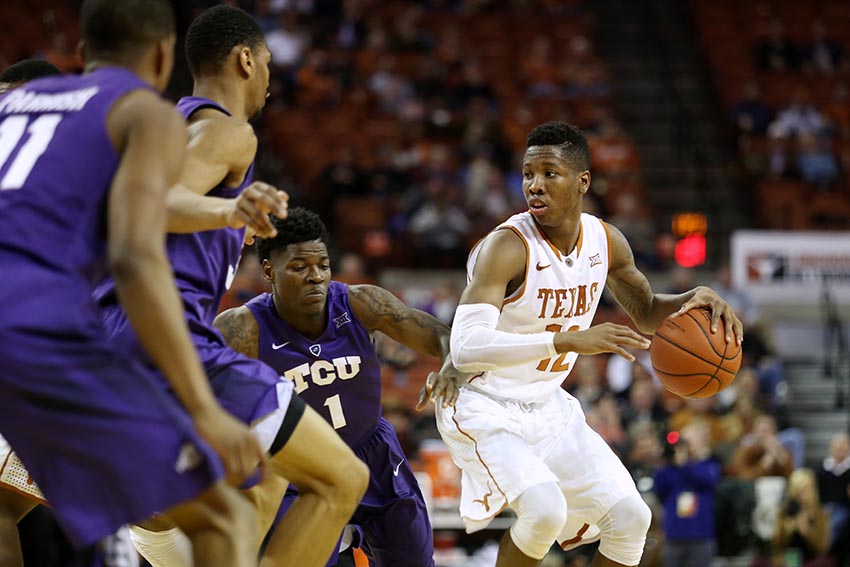 The Big 12 prevailed in Saturday’s Big 12/SEC Challenge. The conference went 7–3 against the SEC and won the final four games of the day.
The marquee matchup came when No. 4 Kansas took on No. 20 Kentucky in Lawrence. The Jayhawks prevailed 90-84 over the Wildcats in an overtime thriller. One of the bigger surprises came when TCU, the last place team in the Big 12, took down Tennessee, led by former Texas head coach Rick Barnes, in Fort Worth.

Hield outlasts Simmons
Oklahoma played LSU in one of the bigger games of the Big 12/SEC Challenge. Two stars, senior guard Buddy Hield and LSU freshman forward Ben Simmons, vied for the Naismith National Player of the Year during the game in Oklahoma. In the end, Hield’s Sooners downed Simmons’ Tigers 77-75.
Oklahoma was down by 14, but Hield hit seven second-half 3-pointers to bring the Sooners back. Oklahoma senior guard Isaiah Cousins hit the game-winning jumper with four seconds left to finish the job. Hield finished with 32 points, while Simmons had 14 for LSU.

Oklahoma keeps top spot in AP Poll
The 18-2 Sooners remain No. 1 in the latest AP Top 25 poll. North Carolina, which Texas beat in December, sits at the No. 2 spot. Kansas falls to No. 7 in the poll after losing to Iowa State on Jan. 25. That win helped the Cyclones rise to No. 13. West Virginia and Baylor are right behind them, at No. 14 and No. 15 respectively.