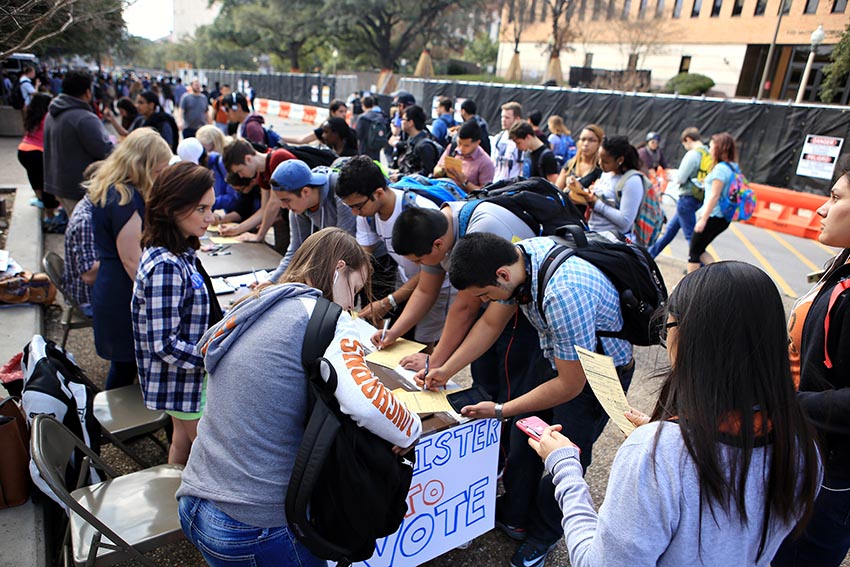 Hundreds of students were able to register Monday to vote in the upcoming Texas primaries as campus organizations and political groups set up registration booths available until midnight.

In preparation for the March 1 Texas primaries, deputized registrars from Hook the Vote, UT Votes, University Democrats and other campus groups were out registering new voters on the West Mall and in front of Gregory Gymnasium.

“We’re just trying to make a last push and register as many students as we can,” said Ashley Alcantara, international relations senior and Hook the Vote director. “Our goal today is a thousand, so we’ll see if we get there.”

Alcantara said the organizations had registered approximately 1,400 students as of Monday afternoon.

“A lot of times, we have to kind of yell and chase people down, but this year, I feel like we have more people coming up to the table,” said Tim Meyer, history senior and University Democrats president.

After registering, students can go to the Flawn Academic Center beginning Feb. 26 for two weeks of early voting before the March 1 primary. Students will also need to present a Texas driver’s license, a passport, a concealed handgun license or another form of state-approved photo identification in order to cast their vote.

Students will not only get the chance to vote in the first competitive presidential primaries for both parties since 2008, but they may also impact the selection of the next representative from House District 49, which covers West Campus and all of UT.

“[Registering] is important, but it’s equally important that you show up at the primaries and also in November,” Rohit Mandalapu, Plan II senior and Student Government vice president, said.

While she’s still undecided on the candidates running for president, public health junior Christina Ngo said she thinks it is still important that students register and get engaged early in the campaign cycle.

“We’re a large population, and it’s important for us to know what’s going on rather than going off what we grew up on from our parents,” Ngo said.

In order to play a larger role in determining which candidates win the Texas primaries student voters need to not only register but also turnout on election day, computer science junior Melody Park said.

“We’re the generation that is going to make the impact for our futures,” Park said.