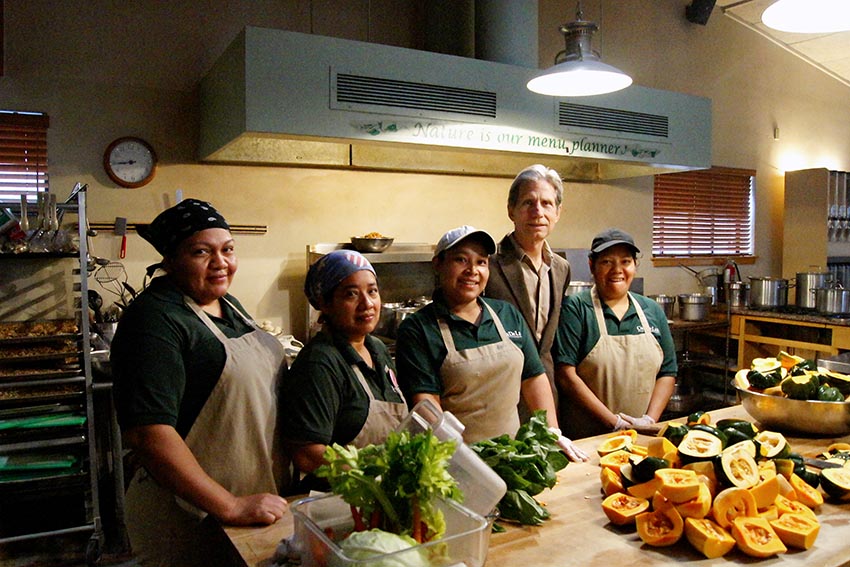 Amid the array of Tex-Mex eateries and barbecue joints near Barton Springs Road lies Casa de Luz, a tucked-away haven for vegans, nomads and hippies to share healthy food and conversation.

“I like to say that it’s a place to come and make connections with people, nature and to expand your connectivity with all things in our biosphere,” said Eduardo Longoria, Casa de Luz co-founder.

For 25 years, Casa de Luz, which Longoria describes as an “educational, experiential community center” rather than a restaurant, has served plant-based, non-GMO foods to Austin’s community. At Casa de Luz, there is no menu. Each meal, served cafeteria-style, consists of a soup, legume, grain, dark leafy green, vegetable and pickle. But according to Longoria, the food comes second to the sense of community Casa de
Luz provides.

At Casa de Luz, strangers are encouraged to sit with one another at one of many large circular tables. Longoria said he has watched strangers at Casa de Luz become business partners and has even seen others get married.

“They are momentary strangers because the next moment, they are your friends,” Longoria said.

Nutrition senior Yannik Rohrer first visited Casa de Luz two weeks ago and has returned for every meal since. Although eating there twice a week is expensive, he said he considers it completely worth it.

“Every time you go eat, it gets better,” Rohrer said. “I’ve been eating here for two weeks, and something has changed, but I can’t really put words to what it is.”

Finance professor Stephen Magee said he has been eating at Casa de Luz, which he describes as a “utopian community,” two to three times a week for about 25 years. As a diabetic, Magee said the low-carb foods served help him regulate his blood sugar.

“I generally feel better when I eat at Casa,” Magee said. “I know I’m going to live longer eating there.”

In 1991, Longoria and his co-founder, Maryann Rose, who has since moved on, opened Casa de Luz with the intention of carrying on the philosophies and traditions of another restaurant, the East-West Center. Before it closed in 1989, the Center served unprocessed vegan food, much like Casa de Luz. Longoria was still eating meat when he was first brought to the East-West Center by a friend in the ’80s, but he said he noticed the health benefits of eating a plant-based diet immediately. From that day forward, he said, he was hooked.

Longoria’s current lifestyle starkly contrasts the environment he grew up in. Before his introduction to the East-West Center, Longoria said he ran a 1,000-acre exotic game ranch in Mexico where people came to kill animals. He said he “ate more meat than most” because during those years, he believed meat-based proteins were the key to health.

He has since changed his mind. For the past 25 years, Longoria has eaten almost every meal at Casa de Luz.

“I can’t live without this place,” Longoria said. “It’s the church I always wanted to belong to.”

Since it opened, Casa de Luz has largely stayed the same. Many of its customers are regulars who have made Casa de Luz a part of their daily lives. First-timers come in search of a change, ready to improve their life, according to Longoria.

“We are always in search of doing it better,” Longoria said. “But I would be happy if I could just spend the rest of my life doing exactly what I’m doing here at Casa de Luz, at 1701 Toomey Road.”