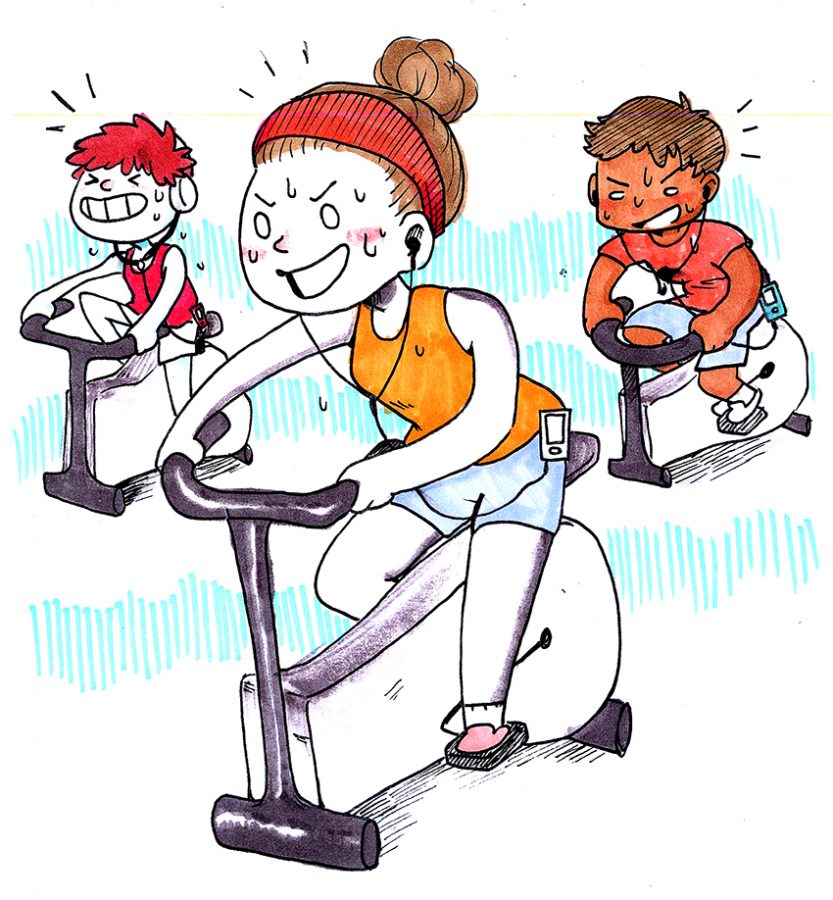 Located on 23rd Street near the Pearl Street intersection, Cyc Fitness attracts not just gym rats, but also UT students and beginner cyclists. Classes, which run at least four times a day, combine a normal spin class with sports-inspired weight lifting moves in an effort to engage cyclists’ entire bodies throughout the workout.

“It is a very high-intensity workout. You can burn anywhere from 500 to 800 calories in a class,” studio manager Heather Barnard said. “We want people to see results, so we even have a hashtag so people can share their stories and spread the word — #PartyOnABike.”

Spin started as a low-impact alternative to running, but Julier said in the years since, it has become a major workout sensation.

“[There’s] no way spin is a fad,” Julier said. “It’s already been around a long time. It will just continue to evolve. There was a huge spin revival in the ’90s with rave culture, so it will probably, like with anything, experience peaks and valleys, but I think we provide such an exceptional and valuable product that it keeps people coming back and wanting more.”

“[Cyc Fitness] has a ton of UT students that come and want to sweat, and for a couple of weeks, we did a thing where we made rides for all the different sororities, and we went and even visited them at their houses.” Julier said. “UT students are a huge part of our demographic.”

Since opening the Austin location in October 2012, Julier said she’s seen the studio’s demographic expand beyond her expectations.

“Many different types of people come here,” Julier said. “We have people in their 60’s who come three times a week and kill it, we have people who come in at 7 a.m. every day before work and never miss a class.”

Cyc Fitness’ original location is near the University of Wisconsin, but the company now includes five branches in cities such as Boston, Atlanta and New York City. Barnard said Cyc’s mission is to provide a full-body workout in a limited amount of time.

“There are not that many workouts that can be this short and get these results,” Barnard said. “At Cyc, we are constantly pushing the boundaries of what a normal spin class can do, and we do that by incorporating many different aspects all in one 45-minute session.”