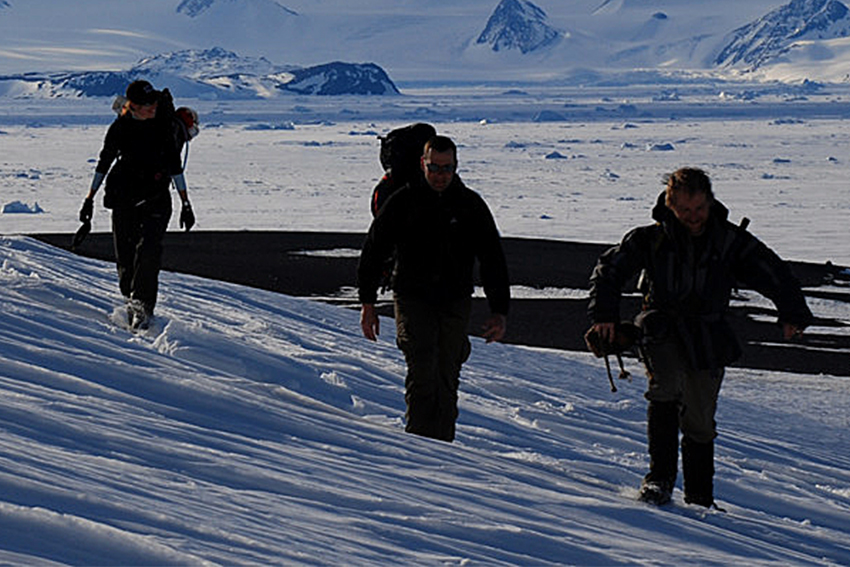 Faculty and students from the Jackson School of Geosciences and the Moody College of Communications traveled to Antarctica in search of dinosaur fossils Tuesday as part of a seven-week expedition.

This is the third expedition under the Antarctic Peninsula Paleontology Project (AP3), a research initiative consisting of a team of different experts from all over the world. The 2016 AP3 field team includes a professor and two graduate students from the University. The primary goal of the initiative is to answer questions about Antarctica’s role in the evolution and migration of vertebrates at the end of the Age of Dinosaurs.

Julia Clarke, a professor in the department of geological sciences as well as a paleontologist and evolutionary biologist, will serve as the leader for this team. Matthew Koshmrl, radio-television-film graduate student, will document the expedition. Christopher Torres, graduate student in ecology, evolution and behavior, is also part of the AP3 team.

Previous expeditions have revealed Antarctica is an important location regarding bird evolution, and laid the foundation for the current mission.

James Proffitt, a geological sciences graduate student who is supervised by Clarke, said the research conducted at the Jackson School of Geosciences has a wide scope.

“Paleontological research at JSG [Jackson School of Geosciences] covers a broad spectrum of scientific fields, studying ancient organisms with a variety of methodologies while also having a strong focus on understanding species that are alive today,” Proffitt said in an email. “Dr. Clarke travels to Antarctica with students to try and find the earliest fossils of modern bird groups, but our projects also seek to understand living birds to contextualize the importance of
the fossils.”

“I’m definitely interested in this research, especially since people from UT are looking into it,” Hope said.

In addition to its scientific significance, the research being conducted by the team holds personal meaning for some students, such as Julie Gonzalez, environmental science senior and president of the Undergraduate Geological Society.

“Julia Clarke’s involvement is especially exciting since she has been one of my most inspiring professors throughout my time in the Jackson School,” Gonzalez said. “The fact that she is a woman in geoscience is an even bigger plus that motivates me to someday be as influential as she is.”