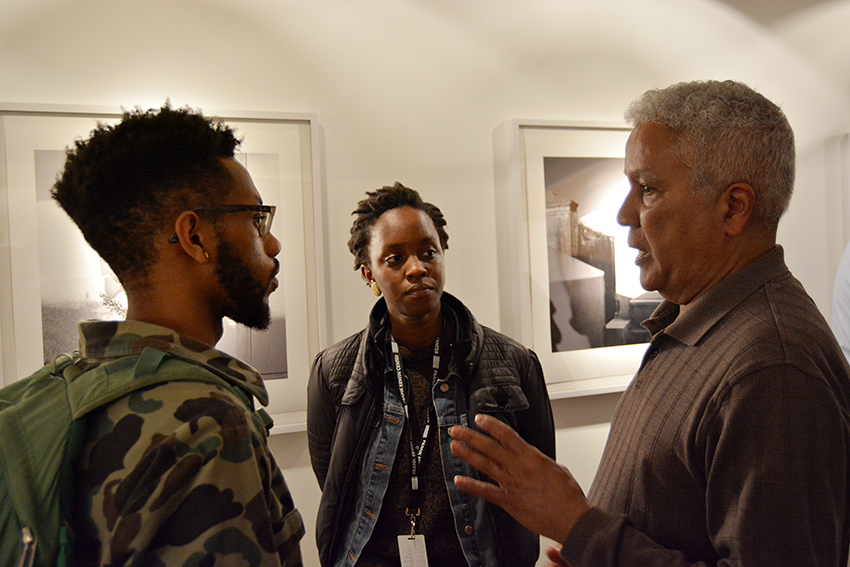 Although artists often choose to portray more common subjects in their work, such as flowers or people, one artist who showcased his work at UT on Wednesday night had a slightly different subject — graveyards.

A group of about 45 students, faculty and the general public gathered at the Gordon-White Building to view John Pinderhughes’s exhibit “Light and Life: St. Louis Cemetery No. 1 Reframed through the Lens of John Pinderhughes.” Pinderhughes has been a commercial photographer in New York City for over 30 years, and he operates his own full-service studio. He is currently an adjunct professor of photography at New York University.

The exhibit consists of 13 black-and-white photos of a cemetery in New Orleans, Louisiana. Visitors were invited to view the photos before a Q&A session hosted by the curator, Phillip Townsend.

David Hulett, anthropology and African and African Diaspora studies senior, said he came to the exhibit to learn more about photography and the residents of New Orleans.

“I wanted to get a better understanding of how life and death are perceived by the inhabitants of New Orleans,” Hulett said. “I know they have a sort of mystical or spiritual sense of what happens after death.”

Pinderhughes said he was more focused on his own emotions when shooting photos, not connecting his art to the outside world.

“I’m really examining something that’s going on inside me — an emotion that this cemetery set off in me a long time ago,” Pinderhughes said.

After working on the collection for over 30 years, Pinderhughes said he released the photos this year because he thought it was the right moment to do so.

“At this point in my life, I’m sort of semi-retired. … Now I’m really dealing with my personal work,” Pinderhughes said.

Townsend said some of the pieces in Pinderhughes’s exhibit portrayed the social disputes occurring about race and social justice in the black community.

“He has one image that is a full image of a grave, and next to it in the backdrop is the Iberville housing projects that it’s so close that it brushes up right against the cemetery, and I sort of think that’s symbolic or a sign that’s talking about how fragile African-American life is in this country and how thin the line is between life and death,” Townsend said.