Students use balloons to show opinions on campus carry 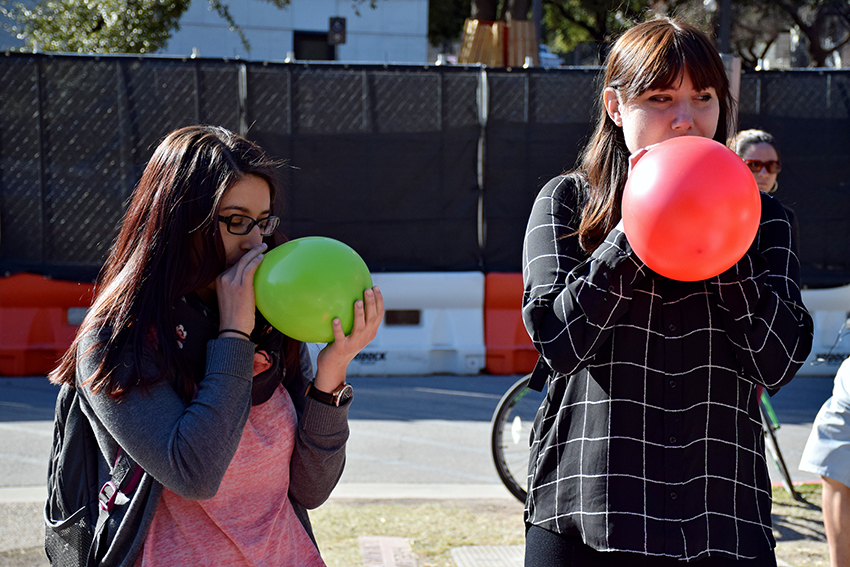 Members of the UT community used their breath — literally — to fill colored balloons representing their opinions about campus carry at an event hosted by the UT Graduate Students Against Campus Carry on Wednesday.

The event “Don’t Waste Your Breath” is in response to campus carry that will begin on Aug. 1, a provision of Senate Bill 11 allowing those with concealed handgun licenses to carry guns on Texas university campuses. Participants filled red balloons representing an opinion against campus carry, yellow balloons a neutral opinion and green balloons an opinion in support of campus carry. The ratio of red, yellow, and green balloons was 14:1:1, respectively, by the conclusion of the event.

Michael Barnes, chair of Legislative Affairs Committee of the Graduate Student Assembly and educational administration graduate student, said UT Graduate Students Against Campus Carry wanted to give students a chance to express their opinions about campus carry in a visual way.

“These balloons will be taken to the GSA assembly meeting where we will consider a resolution that opposes guns in the classroom,” Barnes said. “President [Gregory] Fenves has the power to decide how campus carry will be implemented at UT. We want to make sure graduate students have a voice before he makes a decision.”

Barnes said the event is part of a campaign to help graduate students be politically active.

“I believe it is important for graduate students to begin thinking about how to redirect this energy toward a state legislative lobby effort in the fall, leading into the next legislative session,” Barnes said.

UT spokesperson Gary Susswein said campus carry was approved by the legislature, but presidents of universities were given the power to decide campus specific rules.

“President Fenves put together a council that has spent three months developing recommendations in addition to getting input from faculty and students across campus,” Susswein said. “President Fenves will finalize his decision within the next few weeks.”

Katherine Doerr Morosky, a graduate student in STEM education, said the presence of guns on campus presents a danger to those who attend the University.

“I feel really strongly about this because there is overwhelming evidence that more guns means more death,” Doerr said. “This is misguided legislation that is catering to a tiny minority of essentially NRA lobbyists, and it’s really putting the safety of a huge community of young people at risk.”

Computer science senior David Sipos said he trusts people who have concealed handgun licenses as much as he trusts police.

“A lot of people that are against students having guns on campus assume that concealed handgun license holders don’t have the training that is necessary, but they give all the trust to the police officers that are walking around with guns anyways,” Sipos said. “We have trust in police who are just people like concealed handgun license holders, and I don’t think it’s an educated position.”

Biology freshman Uyi Evbayiro said he can see reason on both sides of the campus carry issue.

“I feel like there are positives to both sides. Allowing people to carry guns on campus could possibly prevent a mass shooting,” Eybayiro said. “At the same time, I understand the risk involved. Having guns on campus could also pose a risk or danger to other students in class because we can’t really predict how people feel.”

This article has been updated since its original publication to reflect that the event was hosted by UT Graduate Students Against Campus Carry, not the Graduate Student Assembly.