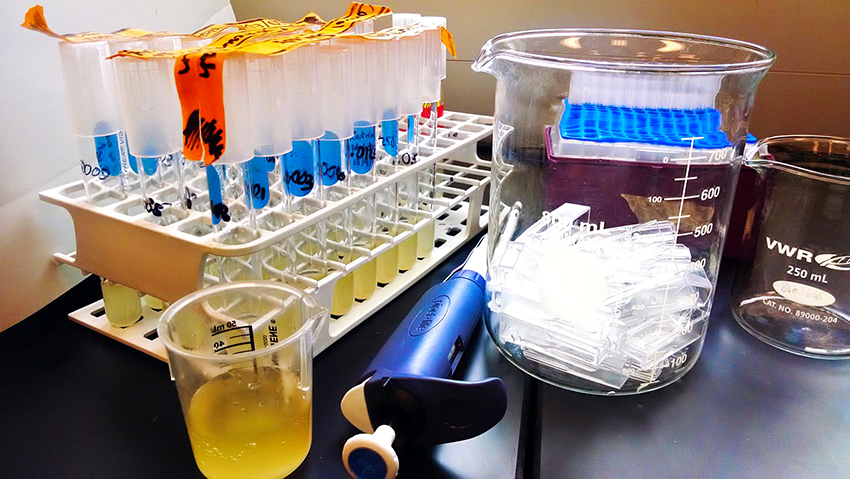 A new laboratory technique that reveals the intricate workings of genetic material is developing at UT-Austin. UT graduate student Brant Gracia researches how RNA molecules form functional shapes to improve researchers’ understanding of and ability to manipulate these molecules.

RNA enables and controls the expression of genetic material in organisms such as humans. Gracia’s research on RNA has applications in medicine, therapeutics and pharmaceuticals.

Because RNA is a single-stranded molecule, it can rearrange itself from its secondary, linear structure into a three‐dimensional “tertiary” structure that takes up space. Previously, scientists believed the secondary and tertiary structures to be infinitely cooperative, meaning one structure could not occur without the other, according to the Proceedings of the National Academy of Sciences of the United States of America.

Through his work in the Russell lab, Gracia contributed knowledge about the behaviors and potential applications of RNA by discovering that the secondary and tertiary structures could, in fact, be induced separately.

“The immediate implications of my research are how to quantitatively dissect and understand molecules and their mechanisms,” Gracia said. “By studying the details of these RNA structures, others can hopefully come up with clever ways to engineer a useful molecule.”

Gracia is not alone in his endeavor to discover the dynamic possibilities of RNA. UT research educator Gwen Stovall leads a Freshman Research Initiative (FRI) stream that develops aptamers, which are sequences of RNA or DNA, to perform specific functions. Stovall’s stream has designed therapeutic RNA sequences to target proteins involved in neurodegenerative diseases such as Alzheimer’s. Stovall predicts that designing an aptamer that stops these diseased proteins from functioning could lead to successful medical and diagnostic applications in the future.

“I think that we are pushing the needle forward,” Stovall said. “I feel that our research is not only developing oligonucleotide (nucleic acid molecule) tools that have very beneficial applications to the new world, but it is making fantastic scientists [who] will be solving the real challenges we face today.”

Gracia has fulfilled Stovall’s prediction in a profound way: by founding UT’s scientific outreach organization, called “Present your Ph.D. thesis to a 12 year-old.” This program allows graduate students such as Gracia to introduce K–12 students to the research tract in academia. It also helps graduate students learn to communicate their research to a novel audience.

In a study conducted by Gracia and his team, the project made graduate students feel that they could communicate their research more successfully.

“I think there’s a huge communication barrier between scientists and the rest of the world,”  Gracia said. “It’s important for scientists to bridge that gap and to improve interest in science and research in general.”

Gracia’s research on RNA also continues to gain momentum, as he and his collaborators recently developed a new technique called “rigorous quantification” to accurately evaluate the RNA they study. This advancement will allow researchers to manipulate genetic material with greater precision than ever and to fully comprehend the molecules they study.

Gracia discovered his passion for research while pursuing his undergraduate degree.

“I found out that I was really interested in the underpinnings of why something happens physically,” Gracia said.

Gracia is thankful for his experiences at UT, including networking opportunities, knowledgeable professors and, most importantly, the guidance he received from his advisor while learning newfound research techniques.

“I feel lucky to have the opportunity to learn these things and to teach undergraduates about my research,” Gracia said.

This article has been updated since its initial online publication.