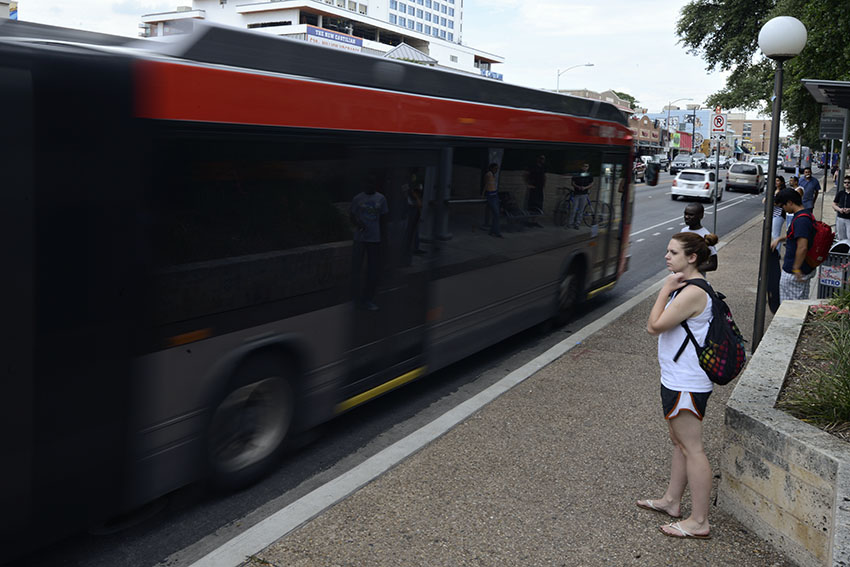 When you have gotten ready for class, walked to the bus stop on time and even managed to eat breakfast, the West Campus bus arrives late. Waiting at the stop, you start weighing the costs and benefits of walking or waiting even longer. As you finally decide to walk the extra mile to class, you look back. There it is — the bus finally reaching its stop. This is the dilemma for most West Campus bus riders.

The University allocates a large amount of funds for its shuttle system each year, allowing students with valid student IDs to utilize any Capital Metro service without paying fares, according to CapMetro communications specialist Amy Peck.

Peck notes that students new to campus are often unfamiliar with transit services and as a result, do not take advantage of these services.

“While riding Capital Metro’s services is free to students on a per-ride basis, the funding Capital Metro receives from UT to provide these services for students comes directly from student fees,” Peck said. “Therefore, those students that ride are getting the most for their money.”

However, the issue for most students that live in West Campus, centers on late arrival, not unfamiliarity.

Only four buses operate on West Campus’s UT Shuttle Route 642. Although this route should cycle every six to seven minutes, students usually find themselves waiting for the bus longer than they expected, making the service difficult for students who try to arrive to class on time.

“Once I had to wait 30 minutes to get on the bus at 5 p.m., which is rush hour for [West Campus] buses,” psychology junior Micaela Williams said. “I’ve heard stories of people waiting as long as one hour for the bus.”

The West Campus bus system deserves more aid to overcome its shortcomings because of the overwhelmingly large student population that resides there. Because of the inefficiency of the bus system, it would be beneficial to invest money in developing a mobile app that tracks the exact location of different buses. Based off of this layout, students can plan accordingly and waste less time waiting for a bus that seldom arrives on schedule.

A mobile bus tracking app, such as Waze, could display the four West Campus shuttles on the route map so that students can know the exact bus location and plan their means of transportation accordingly.

“I can see that as useful and not very hard to do,” electrical engineering junior Saad Najmi said. “Each of the four West Campus buses would need an Internet connection, which would be simple to install.”

When West Campus bus riders were proposed this idea, their faces lit up in support.

“We take the buses to get to class on time, which requires planning on the student’s side, but when the bus system becomes disjointed it gets frustrating,” Williams said. “I know that there are suggested schedules up online of the bus times but from a student’s perspective they haven’t adhered to that as well as I hope they would have.”

This initiative would not only be beneficial for bus riders, but could provide app developing experience for UT students. The app would produce an ongoing contribution to the university’s community. For all you students who are rushing to morning classes, you should know whether to walk the extra mile or not.

Saifullah is a neuroscience sophomore from Richardson. Saifullah is a Senior Columnist. Follow Faifullah on Twitter @coolstorysunao.