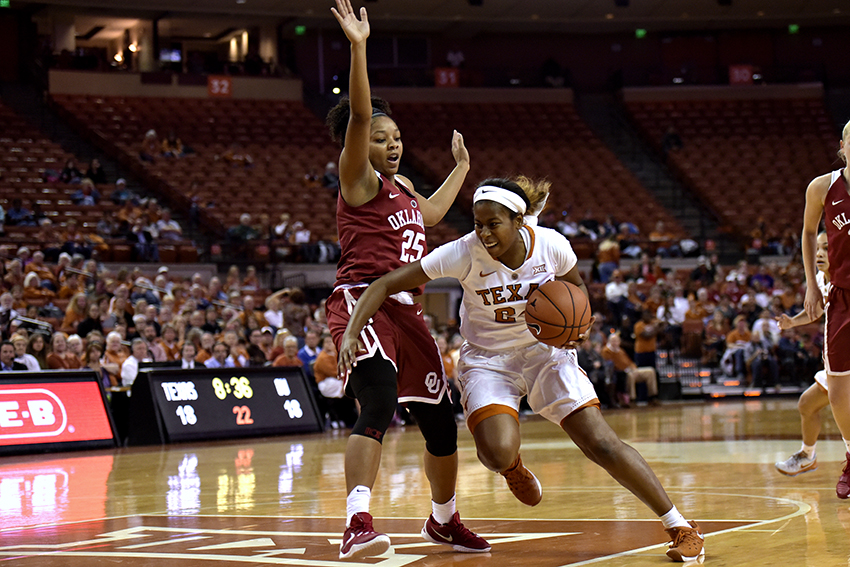 The Longhorns looked to be in trouble early in the third quarter.

Iowa State had taken its first lead of the game, senior center Imani Boyette sat on the bench with foul trouble and junior guard Brianna Taylor had just left the court with a lower leg injury.

But No. 6 Texas fought back, outscoring the Cyclones 25-12 over the next eight minutes to take a 47-39 lead early in the fourth quarter. The team never looked back on its way to a 65-49 victory.

The Longhorns (21–1, 10–1 Big 12) had an entire week off before traveling to Ames, Iowa. Head coach Karen Aston said playing away from home is a tough task, despite the Longhorns’ perfect 9–0 record in true road games.

“I can’t discount the fact that we have players that may have a mental block with some of these road games,” Aston said.

Taylor had just six points and three rebounds in ten minutes of action before injuring her lower right leg while playing defense.

Sophomore guard Ariel Atkins, however, stepped up where Taylor left off, finishing the game with a career-high 22 points and 11 rebounds.

“It took a lot, if not everything, out of us today to get this win,” Atkins told Fox Sports after the game. “I was just trying my best to get the best shot I could for my teammates.”

With the Longhorns down 29-33 in the third quarter, senior guard Celina Rodrigo passed up a wide-open 3-point attempt and instead found Atkins in the paint for a layup plus a foul. The three-point play brought Texas to within one, 32-33.

Texas regained the lead and maintained it throughout the fourth quarter, but the Cyclones pulled to within five with less than five minutes remaining.

Atkins, who was starting a game for the first time this season after offseason ankle surgery, answered once again for the Longhorns with another old-fashioned three-point play. She said that there was a gap in the middle of the Cyclones’ zone defense that she exploited.

“My teammates kept telling me, ‘flash middle, flash middle,’” Atkins said. “It’s going to give me more confidence in myself coming off the injury.”

Boyette, the Longhorns’ leading scorer at 12.8 points per game entering the matchup against the Cyclones, finished with zero points in 18 minutes before fouling out. She still brought down eight rebounds to help the Longhorns out-rebound the Cyclones 52-33. Texas has out-rebounded 20 of the 22 opponents it has faced this season.

Aston said she knows how big each game is in conference play.

“I think the one thing that came out of this is that they may now understand you can’t lose your focus,” Aston said.