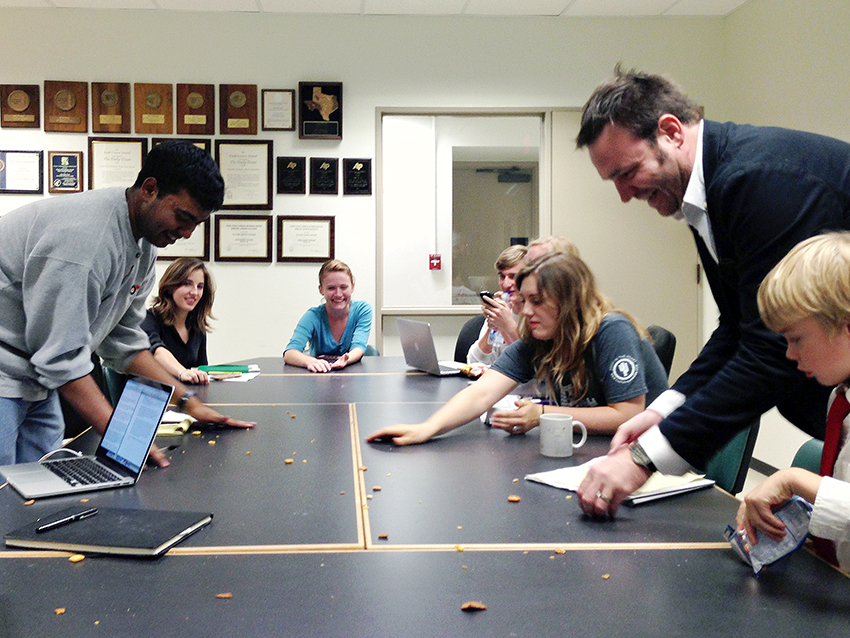 Michael Brick always chose his words carefully. So on March 5, 2014, he took his time flipping through The Daily Texan in front of him. Members of the newspaper staff had traveled to four different cities the day before to report on Texas’ primary elections, and they were waiting eagerly to hear his evaluation of their work.

He pointed out a few details he liked and some choices that could have been better. Then he closed the paper, laid it flat on the table, looked up and declared: “That was the best paper of the year.”

He left the room without another word.

According to former managing editor Shabab Siddiqui, Brick knew how to make an impact.

“He wasn’t sentimental, but he had a flair for dramatic moments,” Siddiqui said. “Little flairs of a guy who’s watched too many sports movies or western dramas.”

Brick, a journalist and adviser for The Daily Texan, passed away early Monday morning in Austin, Texas after a battle with colon cancer. He was 41.

A Daily Texan alumnus himself, Brick served as editorial adviser for The Daily Texan between the summer of 2013 and the summer of 2014. In his fedora, vest and half-undone tie, he brought a sense of professionalism to the basement office, even when surrounded by college students in shorts and flip-flops.

“He created an atmosphere that raised the status quo of what journalists were doing in the basement,” said former managing editor Jack Mitts, who served as design editor under Brick. “He didn’t make any of us feel like kids or that this was a learning experience — he made it feel like this was it.”

“You could tell everything he said was sincere. That meant that he only gave compliments that he meant, and when you deserved criticism, you’d get it,” Rudner said. “It’s really easy, when you’re dealing with students, to either couch your criticisms or lower your expectations, but he never did that.”

Brick approached every job he had at the Texan with equal enthusiasm, according to Stephen Scheibal, director of media relations and community engagement for Dell Medical School. Scheibal, who joined the Texan alongside Brick in 1992, said he could tell Brick was talented right away.

Rudner said Brick cared as much about the Texan in his capacity as an adviser as he had in his own time working on staff. Brick’s passion for the students was visible during his daily critiques, known as “Brickdowns,” and when he was playing in weekly “Staffsketball” games.

“He didn’t want to be the star of the show; he wasn’t angling for a byline — he was helping us to want to angle for that byline, and he helped so many other reporters want to aspire to that same level of commitment and energy that he had,” Rudner said. “All the energy that he had as a staffer, he gave to us.”

Over the course of his career, Brick reported for The New York Times and authored two books — one about Texas public schools and another about motorcycle racing. He left his role as Texan adviser in 2014 to return to full-time writing, becoming a senior writer at the Houston Chronicle, a position he held until his death.

Siddiqui said the breadth of Brick’s writing career proves Brick took the advice he often gave to his students: “to get off your ass and knock on doors.”

Scheibal said the same qualities that made Brick a great reporter also made him a great friend.

“He listened to everything, he absorbed everything — he was always able to run things through this wonderfully human filter that he had,” Scheibal said. “He was able to see the small details that really told the stories.”

“I have hundreds of memories of Mike,” he added. “I’m going to be feeding off all of them for the rest of my life.”

Brick is survived by his wife, Stacy; his three children, John-Henry, Celia and Sadie; his mother, Mary; his father, Robert; and his brother, Jeffrey. His memorial service will be held on Saturday, Feb. 13 at 1 p.m. at St. Louis Catholic Church (7601 Burnet Road). In lieu of flowers, the Brick family requests donations for a beloved organization that has been a tremendous help and comfort to their family: wondersandworries.org.

This story has been updated since its initial publication with the details of Michael Brick's memorial service.