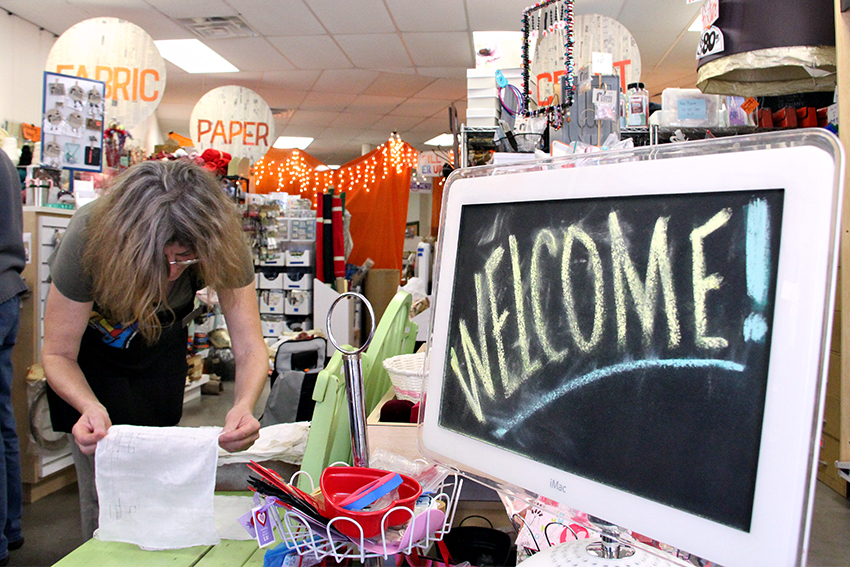 Austin Creative Reuse is a hectic collage of color and texture, of familiar craft supplies brimming over their shelving among stranger donations.

At the back of the room, UT alumna Carole LeClair is guiding her volunteer staff. They’re carefully sorting buttons, ribbons and bolts of cloth. LeClair, vice president of the nonprofit’s board, said she is excited to prepare the new center for its Feb. 13 grand opening. She said that all parts of the showroom have been made from donated materials, and hopes that the center’s own efforts might inspire others to reuse instead of throwing their unwanted materials away.

“I think when people choose reuse first, they often will think outside of the box, and think: ‘Well, I don’t really need to have a piece of wood for that, I could really use a piece of plastic, if it was the right size.’ And maybe we have that right thing.” LeClair said.

The motif continues even in parts bins, which are made of repurposed signage.

The Creative Reuse Center is a place for patrons to donate unwanted materials and buy used ones for cheap. This uncommon exchange is all in hopes that Austinites will see the value in directly repurposing old goods rather than sending them to a recycling plant or landfill.

ACR has been active in Austin since 2011 when board president Rebecca Stuch founded the organization. But the start of a brick-and-mortar location marks a new beginning for the group, which once worked from rented storage spaces and hawked wares from front lawns.

Before ACR had a workspace, it catered primarily to educators, many of whom had to furnish their classroom supplies themselves. In the beginning, LeClair said, the group displayed their goods in the front yards of board members, encouraging teachers to come take what they’d like. Now that the group has a permanent showroom, they hope that more students and artists will look to reuse before purchasing new.

“To me it’s so important that we are a center for anyone and everyone, that everybody is creative and can be inspired by what’s there,” Stuch said. “It’s not children’s crafting, or women’s crafting or men’s tinkering. It’s something for everyone. It’s also a place to share what we have in knowledge.” While Stuch is optimistic that the new center will attract a wide variety of new shoppers and donors, Stuch said that she doesn’t think of the center as a store.

“Because people think of a store, particularly a thrift store, they think that they walk in, they buy something, they leave,” Stuch said. “And we want people to come and hang out, talk with each other, and investigate.”

For students in particular, the reuse center is a cost-effective alternative to buying school supplies new.

Advertising senior Kaci Lambeth said that looking for reusable items helped her stay under budget when shopping at the beginning of the semester. She said she bought binders and spirals for class for less than two dollars.

“After visiting for the first time I knew they had office supplies for sale that were perfectly good, but a fraction of the cost at the Co-op,” Lambeth said. “This is definitely way better. Then you can just give it back at the end, and then someone else can use it. And I think that’s awesome.”

Stuch said that Austin Creative Reuse shows community members how to help contribute to the world at large.

“I don’t want to say making the world a better place, but we have very complex problems nowadays,” Stuch said. “And we need creativity to help solve those problems.”