‘Firewatch’ tells a short, humanizing tale that struggles to resolve its climax 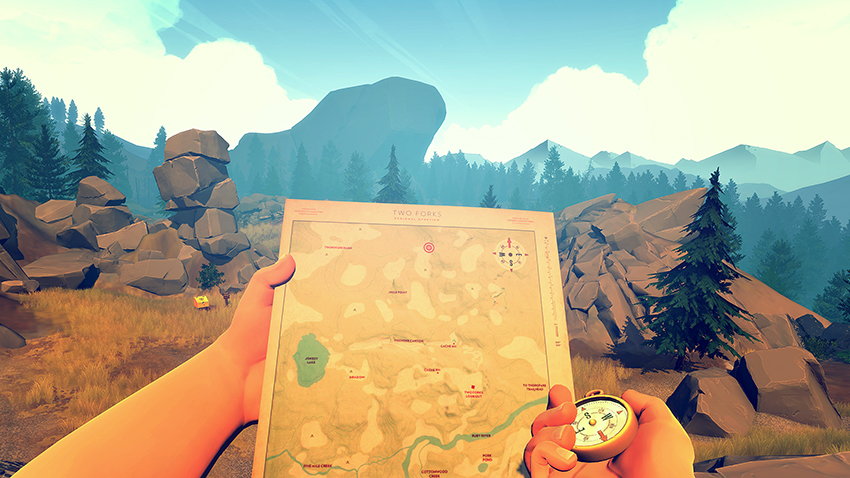 Unlike Herculean figures that take the lead in most video games, Henry is a simple man who’s running from his past. Henry is a human, a seemingly random and self-evident fact that speaks to the power of the
“Firewatch” narrative.

Henry finds refuge in Wyoming, where he volunteers to alienate himself from reality and serve as lookout for park services. His one tether to humanity is his boss Delilah, a park ranger who instructs Henry throughout the game over a walkie talkie.

“Firewatch” is told exclusively through the dialogue between Henry and Delilah, with the gameplay used to immerse the player. The game’s ambiance plays a pivotal role in supporting the narrative with visually appropriate sceneries and gripping music directing the player’s state of mind throughout the adventure.

The game’s atmosphere and story orchestrate a truly rich, thematic experience. While the game begins as a pleasant nature walk away from the woes of the world, strange events involving two teenage girls and an unidentified figure disrupt the tranquility, leaving the player unnerved. The mood of the environment changes fittingly with the story, as mystery creates a sense of paranoia which mars the landscapes with watching eyes.

Without spoiling anything, the game’s ending is a weak point. While the conclusion hides a deep, mature message, it is cruelly anticlimactic and rushed. The tension the game so wonderfully builds up is resolved in a matter of minutes but leaves the player thinking long after the screen goes dark.

The plot arc is overshadowed by the relationship between the two leads. Henry and Delilah’s connection develops organically, letting the player experience their relationship as it develops and displaying how volatile human interaction can be. Their conversations blend tension, humor and emotion, creating a connection with the player — a feat that is rarely achieved.

Impeccable voice acting helps make this aspect of the narrative feel real. Whether the characters are being funny, terrified or sad, their emotions are conveyed with genuine sincerity. When combined with the game’s adult subject matter, “Firewatch” becomes highly immersive, leading the player to envision the two leads not as fantastical fictional characters but as something human.

Due to the nature of “Firewatch,” the gameplay is little more than walking around the beautiful environment listening to Henry and Delilah joke around with the occasional environmental interaction. Fans of exploration will be delighted to explore a surprisingly diverse forest, but players with a more action centric game in mind will be disappointed.

“Firewatch” is an oddity within gaming, playing out more like book than a video game. It’s a character piece about two broken people that strikes at the core of the human condition.