Atkins heats up in second season at Texas 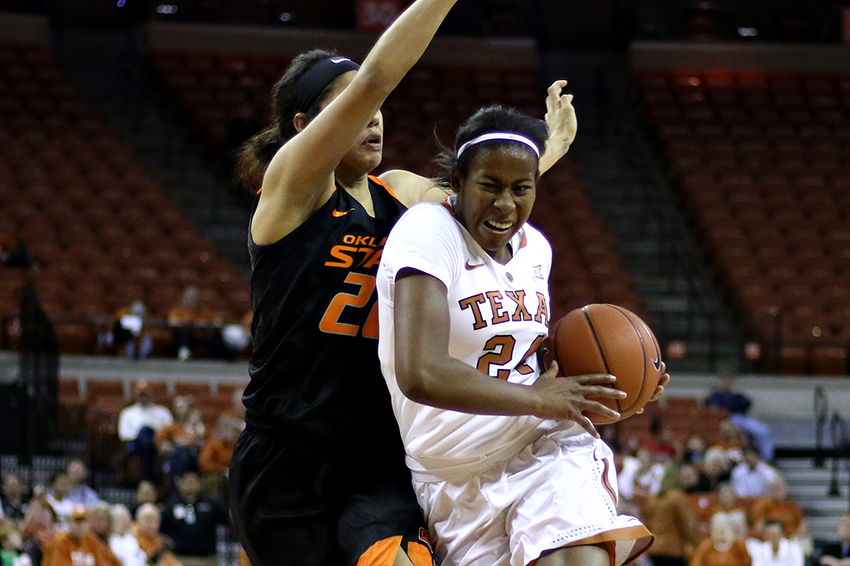 Sophomore guard Ariel Atkins stole the ball midway through the second quarter of No. 6 Texas’ 70-55 home win against No. 20 Oklahoma State on Wednesday night. She tiptoed along the endline, lobbed the ball ahead to fellow sophomore guard Brooke McCarty before falling out of bounds. The hustle play resulted in a layup.

The play was Atkins’ only assist of the night, but it was indicative of her re-established presence on the court.

The Duncanville native missed the first nine games of this season with an ankle injury, but has increased her minutes since returning to action in late December. Atkins averages 10.6 points per game, while shooting 55 percent from the field. Over the last two games, she has averaged 19 points.

Despite earning her first career double-double with a career-high 22 points and 11 rebounds against Iowa State on Feb. 6, head coach Karen Aston said she noticed Atkins’ improved play well before that.

“The TCU game was the game I thought Ariel kind of looked like Ariel again and then I thought Saturday in Iowa she made a tremendous difference for us,” Aston said.

But Atkins said her game is far from at its best. Following the Longhorns’ win over Oklahoma State, a reporter asked McCarty if everyone has seen Atkins at her best yet. McCarty responded with a simple “No.” The reporter then asked how much she has left, but before McCarty could answer, Atkins replied “A lot.”

As a 5’11” left-handed guard who can shoot from deep and penetrate in the paint, Atkins creates a series of matchup problems. Oklahoma State head coach Jim Littell said she has significant upside.

“When they start a small lineup, and they have her at four, it’s a difficult matchup for our four,” Littell said. “We’ve got somebody 6’3” that doesn’t have her foot speed trying to guard her.”

As the Longhorns head on the road to face rival No. 21 Oklahoma on Sunday afternoon, Aston said Atkins can be a real difference maker.

“I do think her timing is getting better,” Aston said. “Her comfort with her teammates and what we expect of her is getting so much better.”