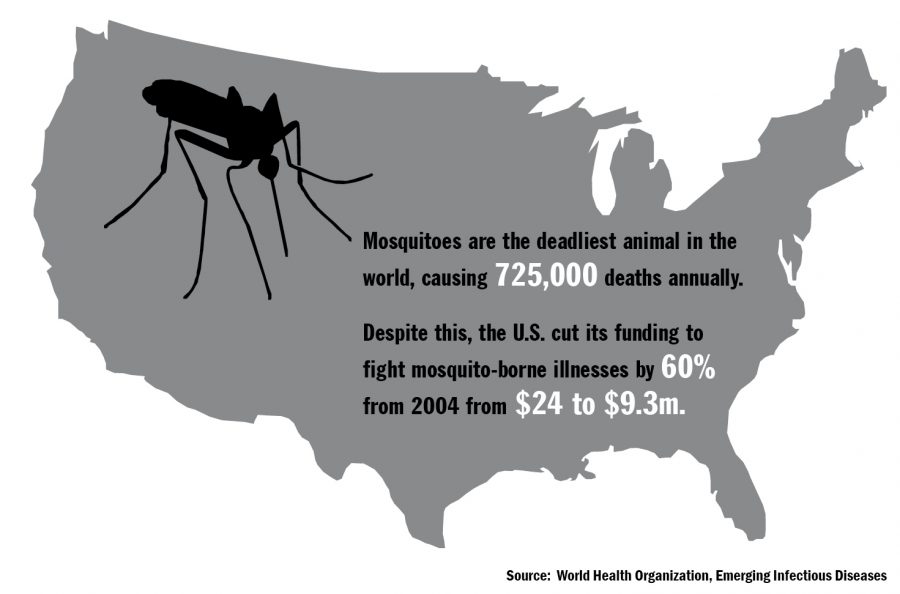 Chances are you hadn’t heard of Zika a year ago. The virus that the World Health Organization (WHO) recently declared an international public health emergency has been around for more than 60 years, but we only started paying attention after regional epidemics become global pandemics. Mosquito-borne diseases deserve attention before they reach this point, not only out of concern for other people in the world, but also to protect ourselves from future outbreaks.

With more people traveling internationally than ever before, it is safe to assume that the afflictions of the world will eventually find their way to U.S. shores — and we aren’t ready.

A 2015 report of infectious disease preparedness found that much of the U.S. is unprepared to handle a pandemic. More likely than not, such a pandemic will come from mosquitos, which kill more people each year than any other animal, including humans. In light of this, mosquito-borne diseases are severely underfunded.

The problem is that with experts’ limited resources, they research what the public deems relevant. Because mosquito-borne illnesses disproportionately affect poorer countries and lower socioeconomic status groups, they don’t show up on our radar.

That isn’t to say that the scientific community hasn’t made great strides in mosquito-illness research. Just last week the University of Texas Medical Branch in Galveston teamed up with the Brazilian government to find a Zika vaccine, and sterile mosquitoes released have successfully combated dengue fever in Brazil. President Obama specified Zika prevention in Texas and other parts of the U.S. in his annual budget proposal. But these measures have occurred in spite of public support, not because of it.

Budget proposals and funding requests for a subject are much more likely to be granted when there is public interest. This is where a layperson can exert some influence over global health. The congressmen and representatives who approve budget proposals are responsible to their constituency, so reaching to these public figures could return attention to overlooked diseases.

Nutrition sophomore Natalia Rios contracted Zika over winter break while visiting her family in Colombia, where the disease has been a common ailment for more than 60 years. She says back then, her friends back in the United States were unaware of the disease, but they are more paranoid now that it has reached Dallas and Austin.

“Things like this just sweep the country and everyone gets ill,” Rios said. “So be thankful that as soon as something happens [in the U.S.] people jump on it with research.”

Objectively, mosquito-borne illnesses pose the greatest threat to world health, a fact we can’t afford to ignore. Ignoring disease until it reaches U.S. shores makes the eventual pandemic much worse and shows disregard for the health of others. We don’t expect economic crises or political movements to be constrained by borders, so why don’t we treat health risks the same?

Hallas is a Plan II freshman from Allen. She is a senior columnist. Follow her on Twitter @LauraHallas.