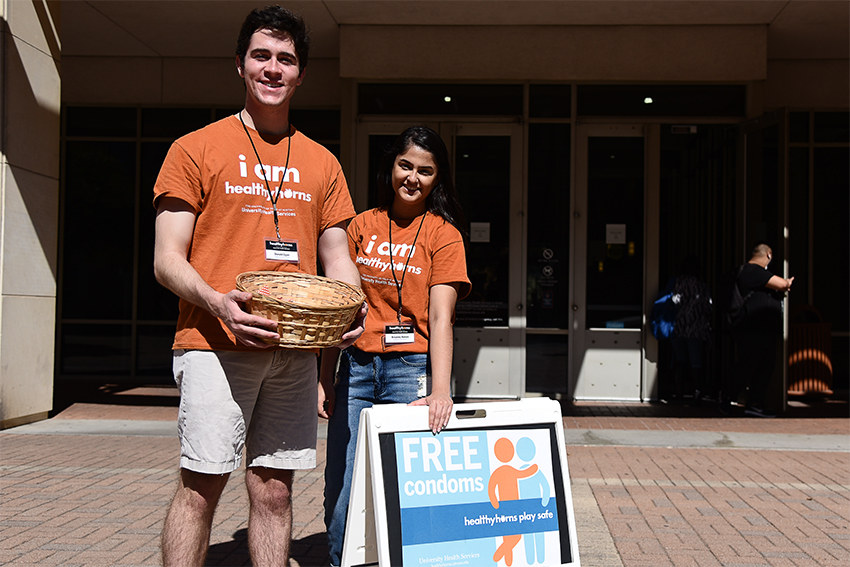 With International Condom Day on Feb. 13 falling side-by-side with Valentine’s Day, UT students and staff saw an opportunity to advocate for safe sex.

Texas Rising, a student political organization, ran a table handing out condoms and cupcakes in front of Gregory Gym on Friday. Member Zoraima Pelaez, a humanities junior, said her group found merit in using a novel approach to giving condoms away, creating mock roses with pipe cleaners and cellophane.

“We know that people are doing it, so we want them to be safe,” Pelaez said. “We thought it’d be cute to hand out these little condom roses for people to give to their valentines.”

A few tables away, two peer educators with University Health Services (UHS) were also handing out condoms to passersby. Breanna Alonzo, a biology junior and peer educator, said UHS representatives were out on either the West Mall or Gregory Plaza throughout the semester to remind students of the resources that are available to them.

“We’re out here every week on either Thursday or Friday,” Alonzo said. ”I just want to make sure [fellow students] know that they have access to free condoms, that the university provides them. Most students don’t know, so this gets the word out.”

Beyond condoms, UHS offers education and testing services for reproductive health and aims to make them as accessible as possible, said Susan Kirtz, health promotion coordinator at UHS.

“We promote STI testing here at UHS, [and] we also have a great web page that offers a lot of resources in the community for STI testing,” Kirtz said. ”For students who may be financially unable or may be uncomfortable about coming into UHS, that’s a great resource.”

“We worked closely with the Student Government and the American Student Medical Association, who are researching funding opportunities to make free STI testing available at UHS," Kirtz said.

According to Kirtz, these measures are intended to benefit students in health and in the classroom.

“We know, and the [Centers for Disease Control] have repeatedly found, that healthy behaviors are repeatedly linked to academic success,” Kirtz said. “We work really hard to make sure that students are healthy but also academically successful.”

This story has been updated since its initial publication to clarify UHS' position on Assembly Resolution 19.