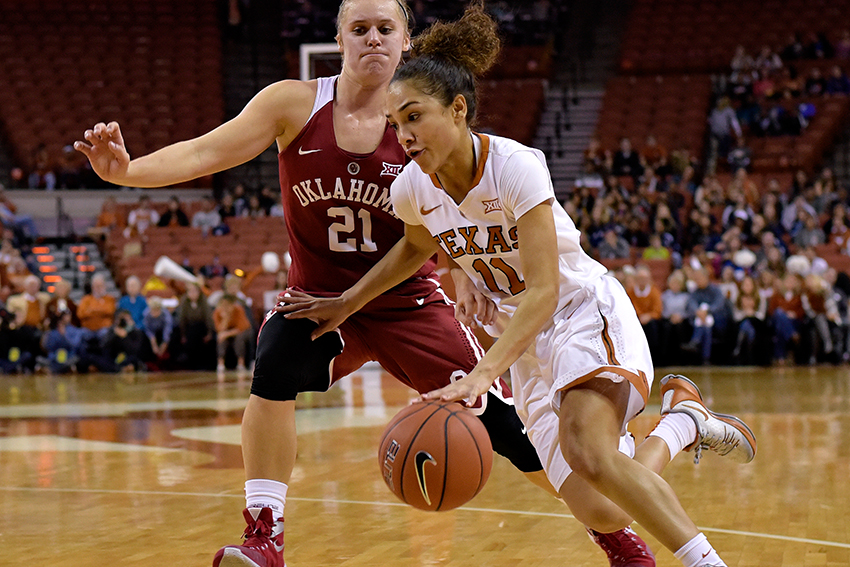 Texas entered the fourth quarter with the lead against a ranked rival, but what looked like a 10th-straight road win for the No. 6 Longhorns quickly turned into their second loss of the season.

No. 21 Oklahoma pounded the Longhorns in the fourth quarter on its way to a 74-56 victory at the Lloyd Noble Center in Norman.

Head coach Karen Aston, who took over at Texas in 2012, is winless in three trips to Norman. Her team was outscored by 22 points in the final ten minutes.

“We just didn’t look like we had the competitive spirit,” Aston said. “I thought we fought hard, but we weren’t nearly as competitive as they were. They were just the better team today.”

The contest was close until Texas (22–2, 11–2 Big 12) fell apart in the fourth. Sophomore guard Brooke McCarty kept the Longhorns in the game for three quarters.

McCarty connected on 2-of-3 from beyond the arc and wound up with 14 points at halftime to lead all scorers as the two teams stood deadlocked at 32 after 20 minutes.

The Sooners (17–7, 8–5 Big 12) started the second half by taking a 41-36 lead. It looked to be danger time for the Longhorns with multiple Texas players on the bench in foul trouble.

But Texas answered with six straight points to regain the lead. The mini run launched a larger 13-2 spurt that gave the Longhorns a six-point advantage, their largest of the game.

McCarty and senior guard Celina Rodrigo both drilled a 3-pointer late in the third that seemed to give Texas momentum heading into the fourth.

A four-point Longhorn lead turned into a 16-point deficit as Oklahoma exploded on a 22-2 run. Five of the Longhorns’ seven points in the quarter came in the final minute when the game had already been decided.

“I think in the fourth quarter we kind of got away from the game plan,” McCarty said. “We gave them open shots and didn’t pay attention to detail.”

Texas shot 29 percent from the field as a team — its worst shooting effort of the season. Only two of the Longhorns’ 15 shot attempts in the fourth quarter went through.

Aston said although the missed shots were a huge factor, Oklahoma was the better team.

“I thought they played every possession like it really mattered,” Aston said. “They had the sense of urgency that was necessary to win a game like this.”

The Longhorns were also outrebounded 45-38, marking the third time this season they’ve lost the battle of the boards.