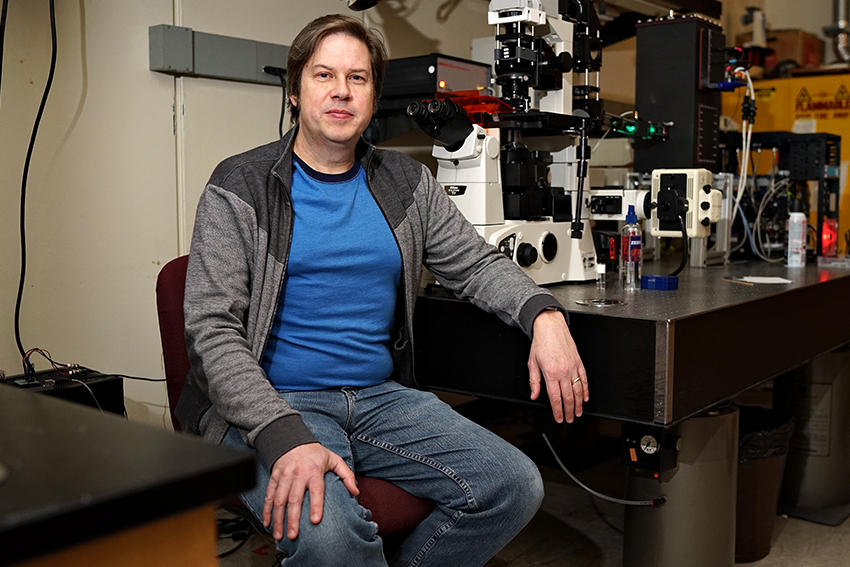 UT researchers have created a microscope that could be used to either observe embryos created in a lab without harming their growth or watch filamentous viruses such as Ebola in action.

Scientists can use this microscopy technique to see movement in living cells at smaller scales than ever before.

The researchers have optimized a pre-existing light microscopy technique to produce sharper images without relying on complex optical components such as prisms. They can now use this technology to view nanometer-sized details in cells without killing them. This means they can see processes in action that they had only viewed as still images of dead cells.

For instance, they now can see the packing of DNA in the interphase cell much more clearly than before. Jeffrey Kuhn, an alum who came back to UT-Austin on a grant to work on this project, said he finds this very impressive.

“We know DNA is packed and ordered, but in the interphase cell we didn’t know it’d got that much. It’s like a bowl of spaghetti supposedly, but it’s really difficult to see the spaghetti, and we seem to be seeing some,” Kuhn said. “I’ve never seen a [microscopic] picture of the nucleus that clear and with that much structure visible inside.”

This technology is called modulated polarity microscopy (MPM). MPM is a process in which the observer alters the direction of light to produce an image.

The microscope has many potential applications in different fields, especially in medical research. Scientists could use it to see neuron structures, among other things.

“One of the hot areas right now is graphene and using graphene for killing cancer, and the microscope offers the potential to study those interactions on the cell level like they’ve never been done before,” biomedical engineering professor Thomas Milner said.

He also said that scientists usually study medical processes at a larger perspective: at organ or tissue level instead of the cell level. MPM could allow for smaller-scale research on the body.

Their microscope is almost ready for commercial use. The three researchers presented at UT’s stARTup Studio at the end of January to find potential investors. They said they hope to sell their technology as an add-on to existing microscopes, but they are still in the initial stages of setting up the company.

Biology associate professor Martin Poenie and Kuhn first worked together on MPM as a part of Kuhn’s doctoral work starting in 2001.

They began using the technology to study T-cells, a type of white blood cell that is difficult to observe accurately due to its size and speed. But while they made some important advancements at the time, they eventually hit a wall.

“We published a bunch of papers, and we made some really important new steps forward, but then it came to the point where it’s like the carrot out in front of you that you can never reach … so we let it go” Poenie said.

Their technique was revisited and perfected starting around 2013 with the help of Milner. Milner said his knowledge of other optics technologies gave them novel ideas on how to make MPM more efficient and produce sharper images.

Now, their microscope translates the polarization of the light on the sample into colors which the researchers can easily manipulate to produce better images. This lets them avoid optical components that have caused them problems with image clarity in the past.

The researchers said they are confident that their microscope’s impressive abilities will prove useful outside their lab, and they are excited to share their advances with other scientists.

“[MPM] should have a life of its own outside of the research,” Kuhn said.