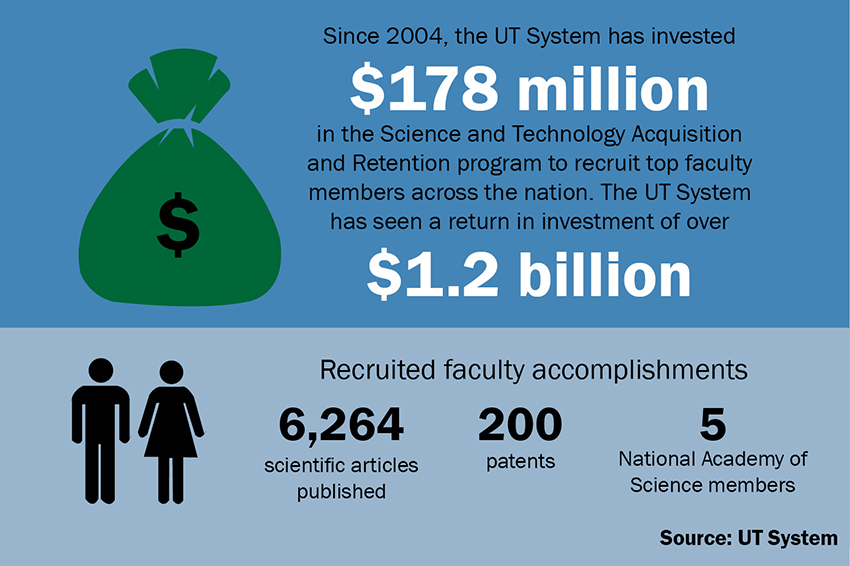 The UT System Board of Regents voted Thursday to fund a program by an additional $30 million that attracts promising faculty members to UT System institutions.

The Science and Technology Acquisition and Retention program, known as STARs, has been used to recruit hundreds of faculty members from other institutions by giving them funds for their research. Dale Klein, UT System associate vice chancellor for research in academic affairs, said the program attracts faculty members from other research institutions who would otherwise be unlikely to join a UT System institution. While the money doesn’t go toward faculty salaries, each faculty member could be offered as much as a couple million dollars after both the UT System and each individual campus contributes to the funding.

“The faculty we recruit are already happy at [the universities] where they are [located],” Klein said. ”We have to basically win them over with incentives and reasons why they have to join.”

Since the program’s launch in 2004, the UT System has invested $178 million in the program and has seen a $1.2 billion return on investment from the UT System, according to a UT System press release.

Some of the faculty members recruited through the program include Bruce Beutler, a UT-Dallas faculty member who won the 2011 Nobel Prize in Physiology or Medicine, and Richard Aldrich, a professor at UT-Austin whose recognized work in neurobiology led to his election to the National Academy of Sciences.

The recent renewal of funding for the STARs program coincides with Chancellor William McRaven’s initiatives to improve the rankings of UT System institutions as part of his strategic plan for “winning the talent war.”

Among other factors, the quality of research at universities plays a large role in their rankings. Drawing high quality faculty members from other institutions helps universities increase research productivity and attract higher quality students, which can in turn increase national rankings and the attractiveness of the university to outside faculty members.

“They oftentimes come in with existing research funds, but also a network of collaborations with other departments and the universities,” Klein said. “If you look at rankings and how universities are perceived, it’s perceived by the quality of our faculty.”

“We can enhance the student experience through the high quality faculty,” Klein said. “It’s not a requirement, [but] it’s certainly an expectation and we encourage it.”

Some of the undergraduates working in these faculty labs are part of the Freshmen Research Initiative, which is designed to pair undergraduate students with faculty members in the sciences. Gregory Ross, Plan II and chemical engineering sophomore, said the program contributes to a strong undergraduate research education.

“Better faculty tend to produce better research and bring in more grants which both boosts UT’s status and prestige in many fields,” Ross said via email. “Those who really enjoy FRI … frequently stay engaged in their research and pursue post-undergraduate education.”

This story has been updated since its initial publication to reflect the correct spelling of the STARs program.