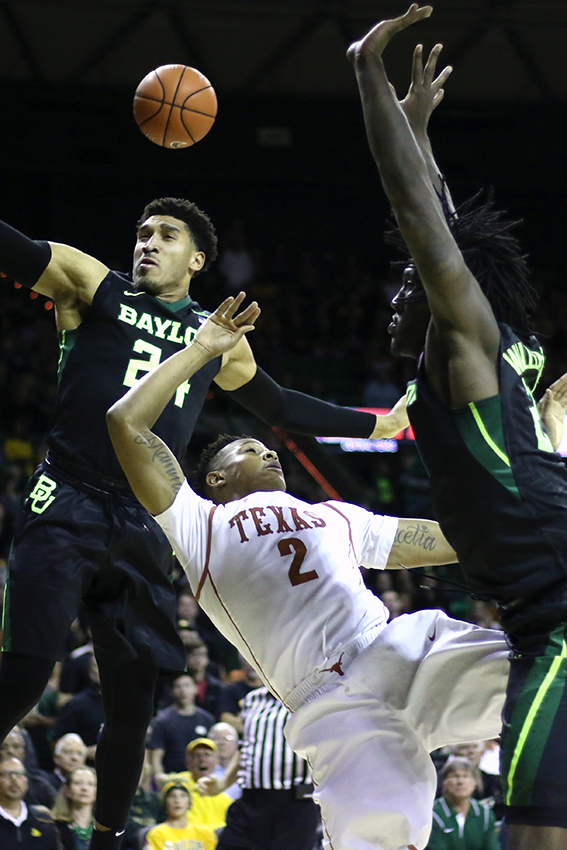 The Jayhawks and Sooners had a rematch of their January triple-overtime classic, which Kansas won in Lawrence 109-106. This time, the stage switched to Norman, Oklahoma, but the result was the same.

Kansas didn’t need three overtimes to down the Sooners this time around, winning 76-72 to take control of the Big 12. The Jayhawks got a career-high 27 points from sophomore guard DeVonté Graham to help counter Oklahoma senior guard Buddy Hield’s 24.

Graham, Burton earn weekly awards
For his play against Oklahoma, Graham earned Big 12 Player of the Week honors. Graham scored 16 of his 27 in the final eight minutes and hit six 3-pointers to help down the Sooners.
Iowa State junior guard Deonte Burton, meanwhile, took home the Newcomer of the Week honor for the third time this season.

Burton is a transfer from Marquette and became eligible to play for the Cyclones in December. He averaged 15.0 points in two games last week, including a 20-point game against Texas Tech. He scored 10 points against the Longhorns on Saturday.

Longhorns go 0-2 last week
In its first week in the AP Top 25, the Longhorns went 0-2 against two ranked teams on the road. Texas lost a heartbreaker to Oklahoma last week, thanks to a stepback, game-winning 3-pointer from Hield. On Saturday, the Longhorns were locked in a close game with Iowa State, but collapsed in the final minutes to lose 85-75. The Longhorns have two more games against ranked opponents this week with No. 10 West Virginia on Tuesday and No. 25 Baylor on Saturday. Unlike last week, both games are at the Frank Erwin Center.

Shake up in AP Top 25
Despite going 0-2 last week, Texas remained No. 24 in the latest AP Top 25 poll. Baylor, which the Longhorns play later this week, fell four spots to No. 25.
Iowa State moved up one spot to No. 13 after a 1-1 last week, including its win over Texas. Kansas, meanwhile, jumped four spots to No. 2 with Oklahoma remaining at the No. 3 spot.
Texas’ next opponent, West Virginia, remains at No. 10 in the rankings.