Longhorns look to the best for approach at the plate 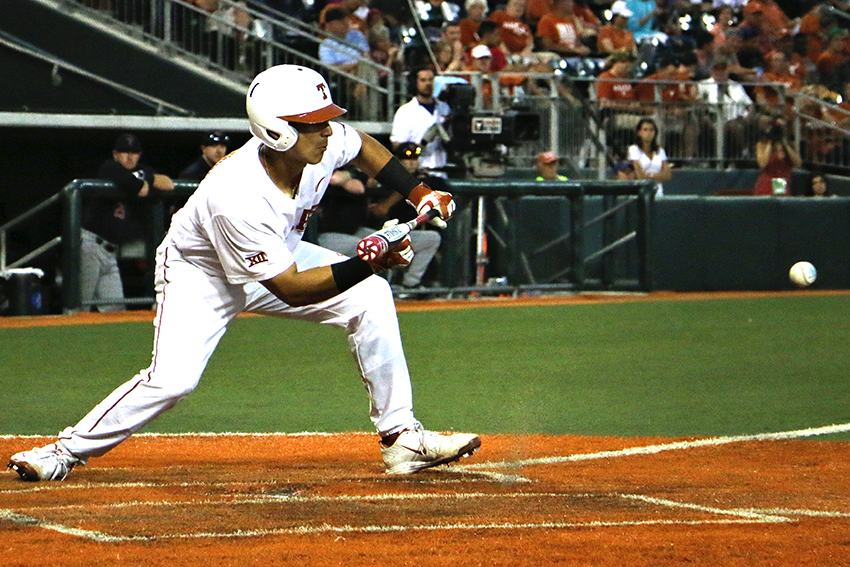 The 2015 Longhorns needed some advice on how to score runs.

The Texas offense did little to strike fear in the hearts of opposing pitchers last season. The Longhorns hit a collective .259 last season, the 227th-best mark in the nation, and junior first baseman Tres Barrera’s team-leading nine home runs were not nearly enough to remedy the rest of the offense’s woes.

Good coaches, however, know that when they need to improve their squad, there is no better place to look for advice than the defending World Series Champions.

“If you wanted a model for this team, take the Kansas City [Royals],” head coach Augie Garrido said. “Put the ball in play, and be unselfish offensively and score runs.”

The Royals, like the Longhorns, lacked a dominant power bat in their lineup but were able to win the 2015 World Series by getting on base, taking advantage of opportunities on the base paths and striking out 134 times fewer than any other team in the major leagues.

“That’s the way you have to play in this ballpark because the home run doesn’t bring the victory very often,” Garrido said.

Texas, though, will have to enter next season without the player who best embodied Garrido’s vision for 2016. Former outfielder Ben Johnson’s team-leading .332 batting average and low strikeout rate would have made the talented outfielder the cornerstone of the new offensive game plan.

But Texas was not the only one to notice Johnson’s potential. Those same Kansas City Royals that Garrido wants to serve as the blueprint for this season’s team took the former Longhorn in the 11th round of the 2015 MLB draft.

Slap-hitting freshman third baseman Kody Clemens, as well as sophomore second baseman Joe Baker who hit .294 as a freshman last season, have the potential to mature. However, wanting to play like the Royals and having the talent throughout the lineup to actually hit like them are not necessarily going to come hand in hand.

The Longhorns won’t clobber their way to another Big 12 title, but if they can do as Garrido said they can — avoiding strikeouts, making contact and taking advantage of every opportunity on the base paths — they can win even without an elite batting average.

Imitating the Royals will require the entire team to rally behind Garrido’s plan and take every at bat with those goals in mind. Even the biggest bats on the team will have to recognize that swinging for the fences every at bat is not going to get Texas back to Omaha.

“It’s not all about hitting home runs and hitting doubles and driving in runs,” Barrera said. “It’s little by little that makes and offense complete, and that’s what we’re trying to do this year.”