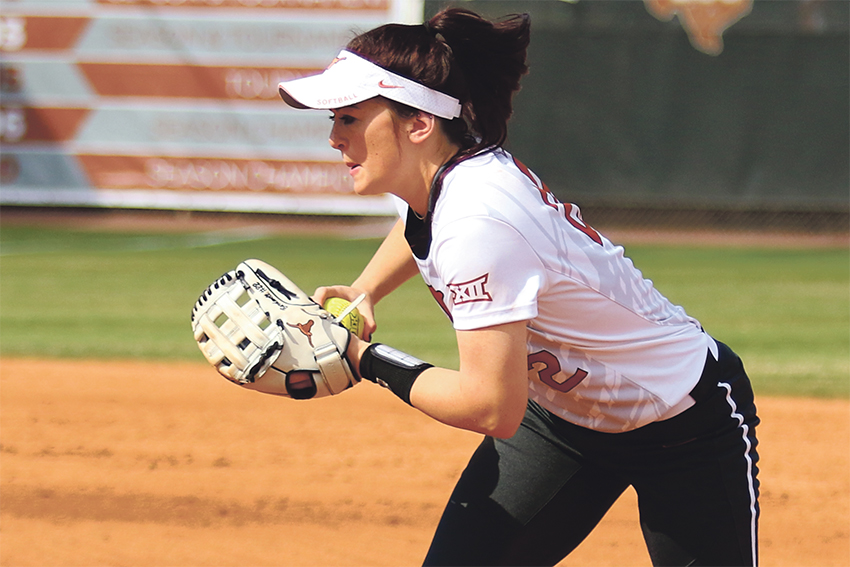 Freshman infielder Christina Bardwell impressed many in her debut weekend with Texas softball.

She played in four of Texas’ five games and earned three starts: one at first base and two at third. She currently sits second on the team with a .400 batting average and her four RBIs are tied for most on the team. Her first big moment came in her second career at-bat when she notched a two-RBI single against the University of North Carolina that led to a Texas victory.

“I think I did pretty well my first weekend out,” Bardwell said. “It’s nothing you can imagine feeling, performing like I did. I didn’t really know what to expect; I had ups and downs, but for the most part it was a good weekend.”

But it’s not just stats that have teammates and coaches excited about the Huffman, Texas native.

Bardwell’s versatility and maturity help deepen the Texas roster and will make the eventual departure of five Longhorn seniors a little easier to handle.

“We were real excited about this class knowing that there are some big-time players in here,” head coach Connie Clark said. “The timing of when they hit our program with five seniors is perfect. Bardwell has the ability to play short, third or first base and stepped up big for us.”

Bardwell was a two-sport standout in softball and basketball at Hargrave High School. On the field, she was the 2013 District 22-3A Most Valuable Player and earned All-State honors in 2014 after helping her team reach the state semifinals.

Her transition to college softball has been smooth. She was a utility player in high school and continues to bounce around between positions as a Longhorn. It was always a dream of Bardwell’s to play for Texas — now that it’s a reality, she’s more focused than ever.

“I decided really young that Texas was where I wanted to be,” Bardwell said. “I was around 11 or 12. My mindset coming into it was ‘I’ll take my opportunities when I get them’ and I’m glad I got as many as I did.”

Bardwell’s confidence isn’t lost on the veterans on the squad. Senior center fielder Lindsey Stephens said it doesn’t feel like Texas has any freshmen because of the focus and maturity of the newcomers.

“They’re the best of the crop,” Stephens said. “They don’t play like freshmen [and] they don’t act like freshmen. It’s so refreshing having them come in and absorb so much and not be afraid, not be timid and just play the way they have their whole lives.”

Whether or not Bardwell continues to make the same impact remains to be seen, especially with games against Arizona, Hawaii and Iowa coming up before conference play. But she’s glad that she came through this past weekend.

“My teammates do a great job making me comfortable and confident,” Bardwell said. “I’m just proud I got it done for the team.”