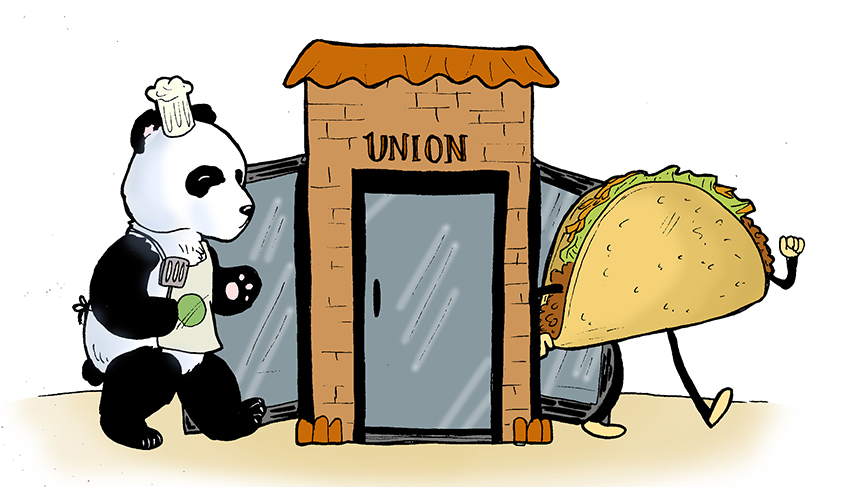 Students looking to eat on campus will soon have an additional choice for meals, as the University is planning to bring Chinese fast food restaurant Panda Express to the Texas Union.

Food services company Aramark has a contract with the University Unions, under which Aramark manages restaurants within the Texas Union — with the exception of Wendy’s. After the closing of Taco Bell last year, restaurant options in the Texas Union include Quiznos Subs, Chick-fil-A, Smokehouse BBQ, Starbucks and Field of Greens Fresh Market.

Taco Bell’s departure came after the restaurant decided to not renew its contract with Aramark, said James Buckley, director of facilities and operations at the Texas Union. After looking at college dining trends and hearing student feedback on the Texas Union board, Aramark officials negotiated a contract with Panda Express.

“Our executive director and Aramark board person strived to meet the needs of our students and found it important to not fill the vacant gap quickly but make sure that whatever we put in there was something that the students wanted,” Buckley said.

Sports management senior Brandy Harrison said she prefers the food options at the Student Activity Center, but her lunch stops may now switch to the Texas Union.

“I will now be frequenting the Union a lot,” Harrison said. “The Union will win my heart now with Panda Express.”

As a college senior on a budget, Harrison said she was excited because Panda Express’s menu offered some of her favorite meals at a low price.

“First off, let’s start with the orange chicken and the honey walnut shrimp. And the wontons. Wow. I can get all of this food for under $10,” Harrison said.

Computer science sophomore Travis Garbe said he eats at the Union when meeting with friends who have different food tastes.

“The options here are pretty solid,” Garbe said. “I’ve never eaten at Panda Express before, but if people wanted it, then I’d say it’s not a bad choice.”

Buckley said demolition and remodeling is scheduled to begin during spring break. Despite speculations the restaurant would open in April, Buckley said the official opening date is unknown.“We’re keeping our fingers crossed that everything runs in a smooth, timely manner, but once the construction process starts, sometimes you never know what you may run into,” Buckley said.