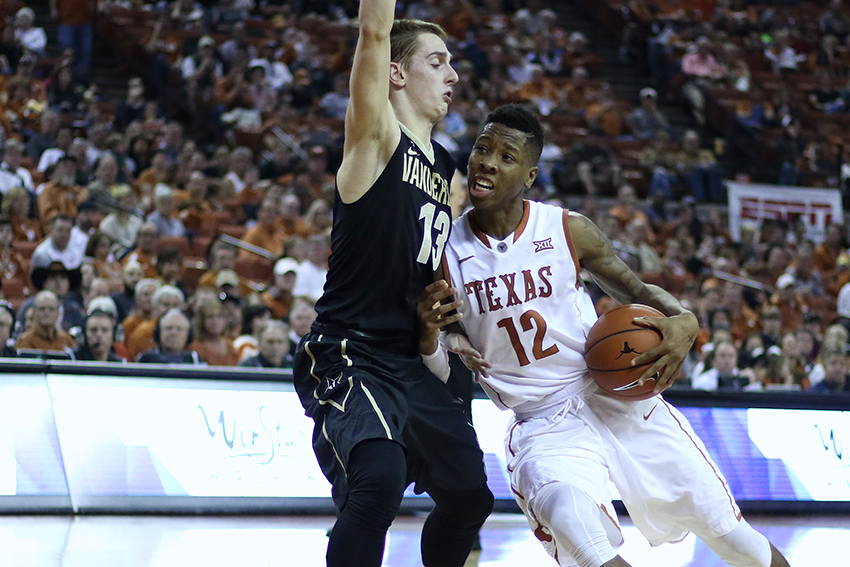 It’s what he’s known for, after all. The high-flying, athletic freshman guard’s specialty is throwing the ball down. Some of his highlight dunks have even garnered national attention.

But lately, Roach has been up to something — focusing on other aspects of his game.

“[I’m] just showing my whole game,” Roach said. “Just letting it slow down, letting it come to me, not really forcing anything.”

Roach was struggling heading into Texas’ matchup with TCU on Jan. 26, shooting only 34.8 percent from the floor and under 60 percent from the free-throw line. His performance against the Horned Frogs was something of a turning point. Roach lead Texas with 22 points, grabbed five rebounds and notched three steals in Texas’ win. It was the first of three out of five games where Roach led Texas in scoring.

“He is really hungry to get better, and I am happy about the way he is approaching everything that comes his way,” head coach Shaka Smart said. “He is a guy that has really high expectations, and there have been some games where he has been disappointed with himself or the results, but he continues to work.”

Roach’s hunger manifested itself in late-night gym sessions with Smart. The two got to the team’s practice gym at 9 p.m. and took shots until the clock struck midnight.

“He told us, ‘I don’t want to be known just as being athletic, I want to be known for my all-around game,’” freshman guard Eric Davis said. “He’s really took pride in that and worked at it.”

That doesn’t mean the dunks have stopped. Roach has had his opportunities to throw the ball down on a few fastbreak occasions, which always wows the Erwin Center crowd. Roach gets his next chance for a highlight on Saturday, when No. 24 Texas hosts No. 25 Baylor.

Meanwhile, Roach and the rest of his freshman counterparts, are still focused on improvement, which Smart is emphasizing in meetings with the three.

“The theme of all of them is progression,” Roach said. “Just keep your head up and progress, and don’t hit a plateau.”