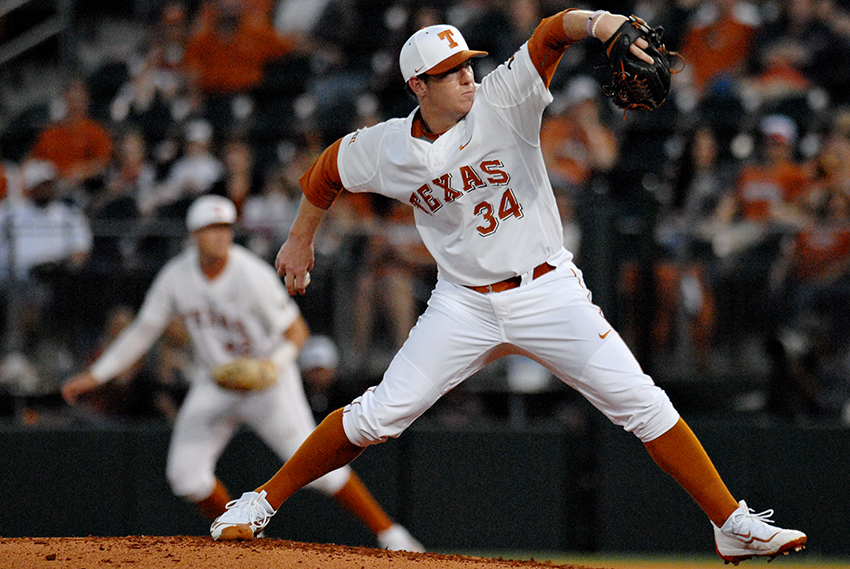 Tres Barrera called the 2016 Texas pitching staff the most talented in his three years at the 40 Acres.

“We’ve got some guys that can throw the baseball,” the junior catcher said. “They’re very talented, but they’re eager to learn.”

However, the staff has less experience than one might hope from a group with ambitions of a sustained postseason run. The 2016 roster only includes three pitchers who started five or more games in 2015 and none of them posted ERAs below 3.95. The youth of the Texas arms has forced head coach Augie Garrido to get creative with how he uses his talent.

Garrido sent out a trio of pitchers with a mere 13 career starts between them in the season opening series against UNLV. Those eager arms that Barrera was talking about did not appear phased by switching from the bullpen to starting rotation.

Culbreth, one of the few seniors arms on the staff, made 22 appearances out of the bullpen in 2015 but was in relatively unfamiliar territory over the weekend. The veteran, however, responded brilliantly to his new role, surrendering just a solo homerun in his five innings of work in his seventh career start.

That homerun was one of two runs that the converted relievers would surrender the entire weekend.

Culbreth may have been accustomed to waking up on game day knowing that he was going to pitch for five innings at the collegiate level, but the success that took many onlookers by surprise was expected by the well-experienced Garrido.

“He doesn’t like getting up, warming up, not knowing whether he’s going to go in or not,” Garrido said. “That’s the hardest and the worst thing about a game, being a bullpen pitcher.”

Relief pitchers know that uncertainty is a large part of what they have to do, but recognizing that fact and actually doing it in a game situation are two separate things. That dichotomy is made especially clear for Texas’ core group of freshman pitchers who were so dominant in high school that all they did was start games.

Garrido responded to the situation by trying to give his young freshmen coming out of the bullpen a taste of the consistency enjoyed by veteran starters.

“The young pitchers especially need to warm up knowing they’re going in the game because that’s all they’ve ever done when they were in high school,” Garrido said. “Warm up before the game, and
pitch it.”