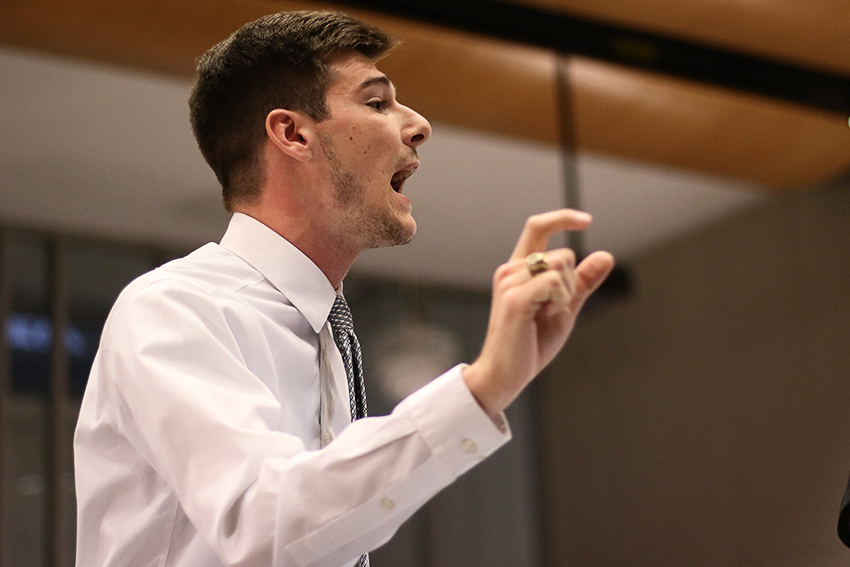 The University Election Supervisory Board, which supervises all campus-wide elections, determined Thursday that an executive alliance campaign team violated the election code by failing to recruit campaign workers individually.

Economics senior Rachel Miller filed a complaint against Kevin Helgren and Binna Kim’s executive alliance campaign for early campaigning. According to the election code, campaign teams are allowed to recruit individuals before the official campaign start date but are not allowed to reach out to students in a group setting.

Elizabeth Vigants, presiding member of the ESB, said Miller brought forth evidence of a message sent by a Helgren-Kim campaign agent to a sorority group chat via the messaging app GroupMe.

“The message was posted in a GroupMe with an undisclosed number of members,” Vigants said. “The Helgren-Kim campaign acknowledged the message as a violation of election code.”

Vigants said the GroupMe message solicited sorority representatives for the campaign as a group instead of individual recruitment. Vigants said the ESB classified the violation as a Class A violation and imposed a charge of $59.50 on the Helgren-Kim campaign.

“There was a violation of the election code, and we are held responsible for the actions of our workers and agents,” Helgren said. “We’re human, and we make mistakes, but we’re pretty happy with the way things wrapped up — a Class A violation instead of a Class B violation. The ruling follows the precedents set by previous ESB and UT Supreme Court rulings.”

Walker Fountain, a government senior who spoke as the representative of Rachel Miller in the hearing, said the violation is a serious issue.

“If one campaign reaches out to many people through a group message, that is obviously unfair,” Fountain said.

Fountain said he thinks the violation followed a trend of recent complaints against the Helgren-Kim campaign.

“ESB has found the Helgren-Kim campaign in violation one time previously for early campaigning, and that was overturned by the UT Supreme Court,” Fountain said. “I think that past decisions by the UT Supreme Court shouldn’t influence the ESB. I can’t speak for [Miller] completely, but I think that the recruiting of many workers at one time merits more than a $60 fine.”