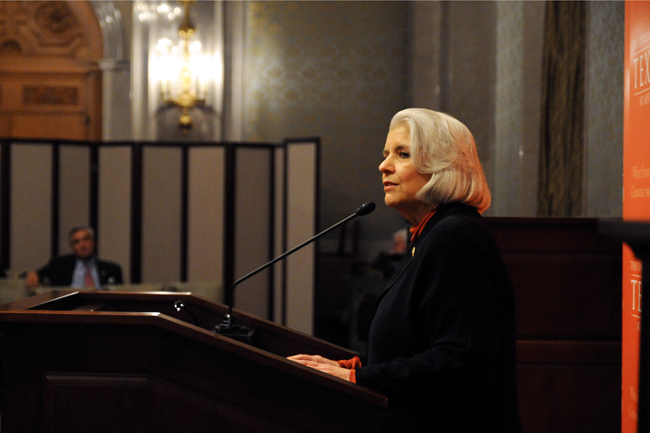 UT alumna and Texas State Sen. Judith Zaffirini (D-Laredo) speaks at a ceremony held in her honor on Oct. 30, 2012. Her son, UT alumnus Carlos Zaffirini, named a scholarship after her to help fund future students’ educations.

The award is given annually to one Moody College graduate who has made outstanding contributions to society and gone on to a distinguished career, Moody director of communications Nicolas Hundley said. Moody College faculty and staff were asked to compile a list of eligible nominees, and Moody College Dean Jay Bernhardt chose Zaffirini, the first Hispanic woman elected to the Texas Senate, from that list.

Zaffirini said the award is incredibly meaningful to her because the education she received at Moody College “changed her life.”

“I am immensely appreciative,” Zaffirini said. “I am forever grateful for lessons learned from great teachers and from great UT professors.”

Zaffirini, who represents Senate District 21, was chosen because of her legacy as a Texas Senator and communicator, Hundley said.

“Her legislative accomplishments … demonstrate the importance of communication in campaigning, representing constituents and furthering discussion with other senators to pass legislation,” Hundley said.

“She is a testament to how one person, equipped with knowledge and talent, can become a powerful advocate for public institutions and often over-looked or under-represented interests and individuals,” Nold said.

The education she received at UT helped her master skills that were critical to her success on the campaign trail, Zaffirini said.

“When my primary and general election opponents each outspent me 2-to-1, I won with less money,” Zaffirini said. “I could write my speeches and press releases, plan much of my advertising and public relations and once produced a one-hour live call-in cable television talk show — with less than a 24-hour notice.”

Although some have belittled the usefulness of her Ph.D. in communications, Zaffirini said it helps her even now as a senator.

“What greater asset could a senator have when required to rise to present a bill and to be prepared to debate any of 30 other senators?” Zaffirini said.