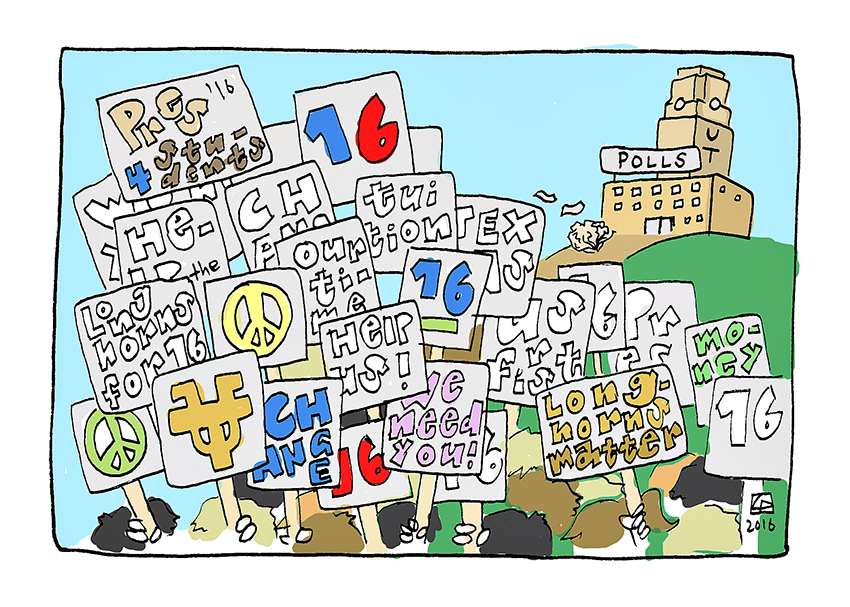 A recent survey conducted by the Higher Education Research Institute at UCLA found that today’s college freshman are more likely to engage in political activism than ever before. It goes without saying that students have had a plethora of social injustice issues to pick from this past year. Whether that be racial tensions at the University of Missouri, concerns about Syrian refugees or campus carry — you name it, if there’s a problem in the world, UT students have probably rallied against it.

Although students may be increasing their engagement on campus via activism and protests, the truth is there is very little chance that such activities will translate into any change. Students ought to engage in other actions within the political process — instead of rallying for a cause on the South Mall for one day, students should simply show up to the polls on March.

Don’t get the wrong idea — protests have worked in the past. Without them, the world wouldn’t have witnessed the suffrage movement or the anti-apartheid movement, and the Arab spring would be nothing but a desert mirage.
But there is a fundamental difference between big protests that come from the legitimate grievances of people who are sincerely concerned about the status quo than a bunch of students that have a general interest in an issue that show up at one spot on campus for a day. Political protests are movements. They last weeks to months to years. They have leaders, and they are organized. Moises Naim, contributor for The Atlantic Magazine, writes that protests need organization and leadership to succeed.

“The problem is what happens after the march,” Naim said. “More often than not, it simply fizzles out. Behind massive street demonstrations there is a rarely a well-oiled and more permanent organization capable of following up on protesters’ demands and undertaking the complex, face-to-face and dull political work that produces real change in government.”

Campus protests don’t grow into large political movements. Before students become compelled to march down Speedway, they should show up to vote on March 1. Engaging in protests without voting is counterintuitive. Voting is the most direct action for citizens to enact change. Unfortunately, it’s a power that the majority of college student fail to exercise. According to a study of the Harvard Institute of Politics, fewer than a quarter of voters between the ages of 18 to 29 show up to the polls.

Given rising political activism and the potential for great change, this low voter turnout is problematic. Millennials are quickly becoming the majority of eligible voters, according to the nonpartisan States of Change Project. This year, there will be as many millennials as baby boomers. College students have the potential to see the change they want in government, as long as they vote.

With the way the United States’ political process agenda functions, voting alone isn’t enough. Instead of spending money of rally posters, students ought to spend it on a SuperPAC that centers around issues that matter to them. Although major presidential-affiliated SuperPACs have a huge influence in national politics, there are SuperPACs that have been created specifically for issues regarding college students, such as DePaul University’s Student Debt Reform PAC.
Protests are not something that any other campus needs right now. Rather, students ought to participate at the polls or engage with student centered SuperPACs. At the end of the day, it will not only lead to more substantial change but a much quieter campus.

Choudhury is an economics freshman from Richardson. He is a senior columnist. Follow him on Twitter @MubarratC.