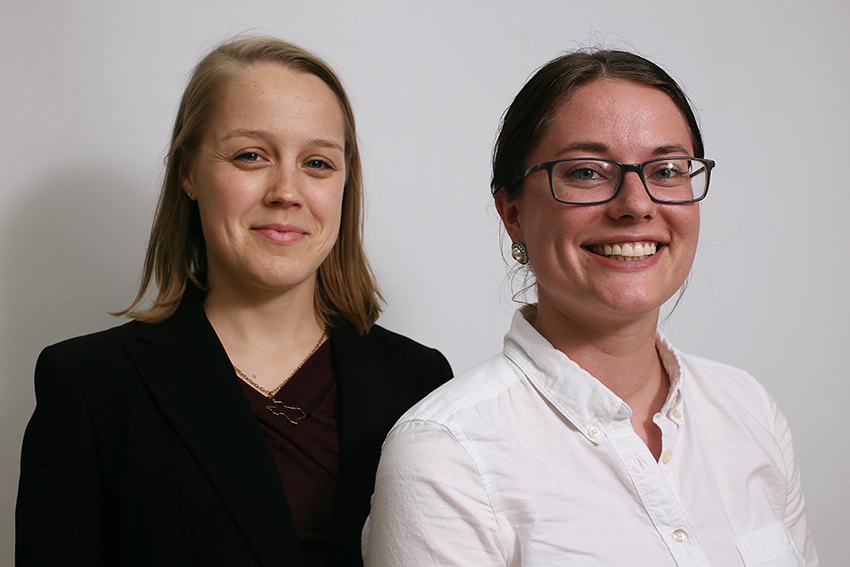 The two women running for GSA president and vice president plan to use their five years of combined leadership experience with GSA if elected.

“I think focusing on concrete things that will help graduate students and pushing those forward slowly from one year to the next, has been really inspiring,” Cook said. “I have really enjoyed my work within GSA. I’m ready for the next step.”

Their platform spells out “ACT” as an acronym and includes: accessibility, community and transparency. Cook and Boisjoli said they swear it was done serendipitously, but nevertheless a representation of what they’d like to do.

Cook and Boisjoli said they want to improve accessibility to important information by updating the GSA website more frequently, facilitate housing and transportation needs for graduate students and increase transparency between the dealings of the University and graduate students.

“While Warner is a professional student and I am an academic student — even though a lot of graduates share the same needs and concerns — we both bring perspectives among the different types of programs where there are also different needs,” Boisjoli said.

Cook is currently the co-chair of the Graduate Student Housing Committee, where she acts as a student liaison between the architects, contractors and UT administrators to program and design the future graduate housing project on East Campus. She also serves as a guide for any representative or committee that wants to pass a bill or resolution but needs help crafting the legislation.

“I see it as we are already doing the work and I know I’m going to keep fighting the good fight next year whether I’m elected or not,” Cook said. “But I know that I could effect more change in a position where I’d be leading the other graduate students because I’ve been there.”

Boisjoli teaches undergraduate introduction to music theory classes at UT and has spent three years with GSA. She was a representative for two years and served as an alternate for one year. She said she wants to keep the momentum going with successful GSA resolutions.

“The last two administrations have done a lot of good work in GSA and we want to keep that moving forward,” Boisjoli said.

Vance Roper, graduate student in Lyndon B. Johnson School of Public Affairs and the School of Architecture, said he thinks Cook and Boisjoli’s experience would be beneficial for GSA leadership.

“There’s no learning curve for them and they can hit the ground running,” Roper said.

Roper, GSA vice president, said he was endorsing their campaign as a student but not as a member of the GSA due to campaign rules.

“I’m supporting them because together they have over five years with the GSA,” Roper said. “I have seen them attend every meeting.”