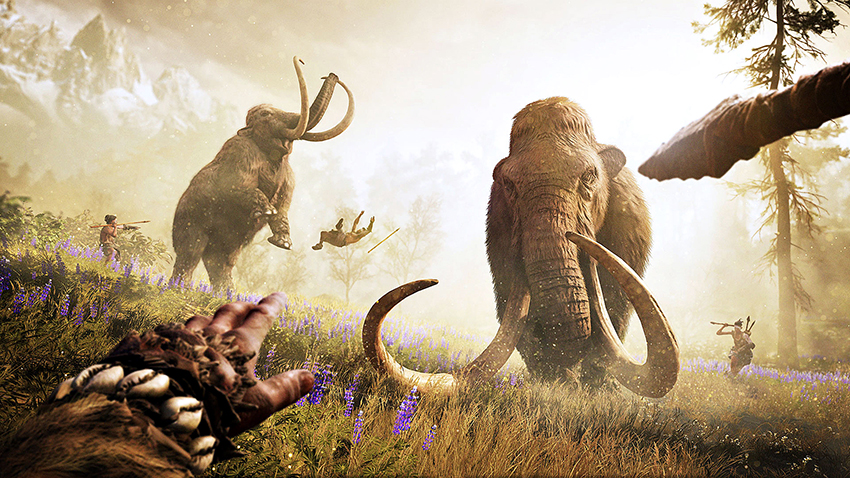 “Far Cry Primal” is a stagnant present wrapped in a seemingly innovative package. The game’s devolution from a modern, first-person shooter to a prehistoric spearthrower is an overwhelming departure from the franchise’s norm. It shares many of the same roots and problems of its ancestors, which makes “Primal” a little more than a clever reskin of the third and fourth “Far Cry” games.

The game’s campaign begins in Oros, a slice of eastern Europe set in 10,000 BCE where the player takes the role of Takkar, a member of a hunter-gatherer group called the Wenja. Takkar seeks to repel the Udam, a cannibalistic tribe, and the Izila, an advanced agrarian civilization, who are stomping out the Wenja.

This storyline lacks any tricks or twists that would divert the narrative from its linear path. Instead, it seems to be there purely to add context to the game’s many combat scenarios where Takker has to slaughter enemies until a boss or cutscene comes along. A cast of secondary characters adds a bit of fun to the tedious campaign, but most of them are quickly forgotten as the story progresses.

Companionship in “Far Cry” comes from the world’s prehistoric animals; Takkar has the ability to tame wildlife and use them as tools. Most of the animals serve to replace functions lost from the previous “Far Cry” games — the sabertooths replace a car for faster movement, beehives replace grenades and owls replace cameras.

Calling “Primal” just a reskin isn’t fully accurate, as the games pours an immense amount of detail into building a world before the modern man. Different tribes feature unique designs and costumes; visuals paint a cold, harsh world and audio adds a sense of realism. Dialogue is all told in a fictional, but historically-based, language that cements “Primal”’s ancient atmosphere.

The gameplay isn’t breaking any new ground, but what’s there is enjoyable. Combat is pleasantly diverse with a wide array of tools. The player can quickly switch between weapon types to liven up the mayhem, picking off some enemies with his bow, then switching over to his spear and finally, in proper cavemen fashion, pulling out a club to bash their way to victory.

If those features aren’t enough, players can use their animals to change things up. The feeling of riding a prehistoric bear into battle is invigorating, to say the least, and enhances standard battles. Jaguars and owls aid players looking to take the stealthy approach, mammoths can help the impatient player move faster, and sabertooths can help a cowardly player run away.

It is “Far Cry Primal”’s inability to innovate that is the crux of the game, for every ingenious detail found in the game’s settings and mechanics, repetitive gameplay and poorly constructed narrative hold it back. “Primal”’s seemingly vast departure from the explosive shooters that precede it serves as a phenomenal attention-getter, but like the Neanderthal, this attention doesn’t last.