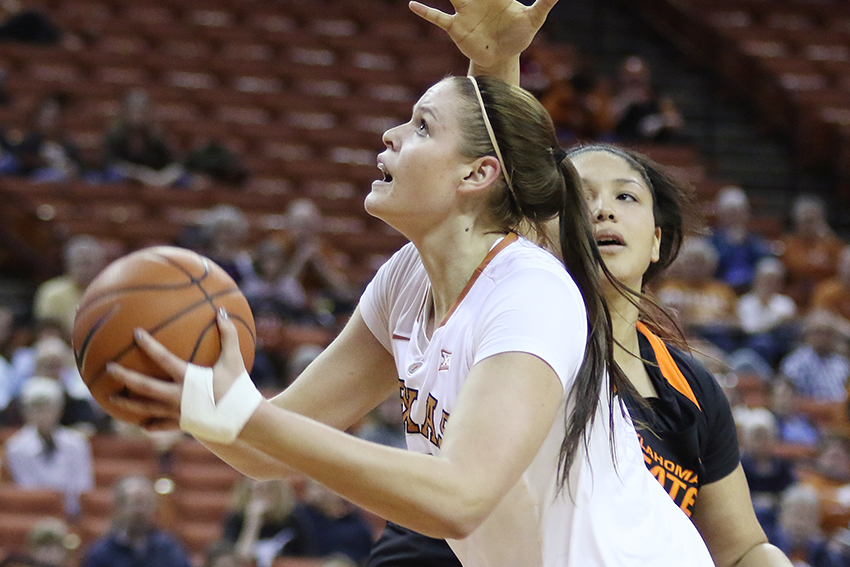 The Longhorns entered Lubbock with a confidence boost. Texas dismantled West Virginia — winner of 20 games this season — by 23 points on Sunday.

But Texas Tech (11–16, 2–14 Big 12) gave No. 8 Texas an early battle on the southern plains Wednesday night. The Red Raiders grabbed a seven-point lead towards the end of the first quarter.

Still, the Longhorns withstood the storm and hung on to win 76-55.

The victory gives Texas 25 wins in a season for the first time since 2003-04, and the Longhorns still have two conference games to play before the conference tournament in March.

The Red Raiders rattled off 16 straight points in the first quarter after Texas scored the game’s first seven. Tech took a 23-16 lead into the second quarter after shooting 64.3 percent from the field in the frame.

But the momentum that Texas (25–2, 14–2 Big 12) brought out west reappeared in the final three quarters.

Sophomore guard Ariel Atkins drilled a jumper early in the second. Junior guard Brianna Taylor then drew a charging foul on defense, which led to a layup from senior center Imani Boyette at the other end.

The basket pulled the Longhorns to within one, with 7:32 left in the half. The sequence of plays set the tone for the second quarter — a much different period than the first one.

Texas outscored the Red Raiders 22-5 in the second quarter. Junior center Kelsey Lang scored six points consecutive points as Texas ended the half on a 12-1 run.

The spurt gave Texas a 38-28 lead at halftime. The Longhorns were quick to forget their poor first quarter, outscoring the Red Raiders by 38 points
after the opening period.

A trio of Longhorns ended the game in double figures. Atkins lead the way with 13 points and seven rebounds. Lang added 12 points and sophomore guard Brooke McCarty had 11.

The Longhorns shot 50.8 percent from the field in addition to 41 rebounds.

Texas hosts TCU on Saturday night in the  Longhorns’ last regular season home game. Tipoff for senior night at the Erwin Center is set for 7 p.m.

Atkins told 104.9 FM after the game that she’s looking to send the seniors out the right way.

“It means absolutely everything to us,” Atkins said. “They’re the ones that sparked this program when coach Aston came in. It would mean the world to me to send them out big.”