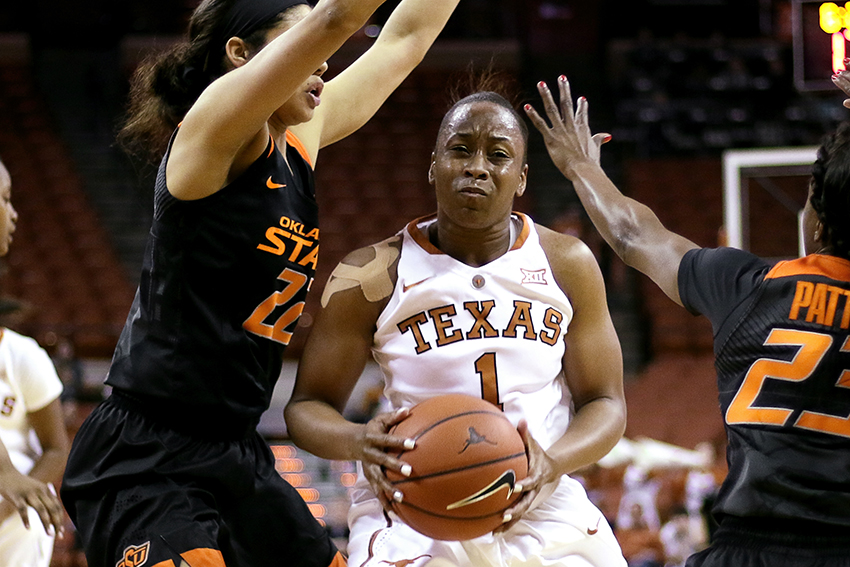 A win at Tennessee, a trip to the Sweet 16, at least a second place finish in Big 12 play, two engagements and over a dozen individual awards. Those are just a few items on the 2016 senior class’s resume.

But even with a resume as extensive as that, senior guard Empress Davenport doesn’t predict she’ll cry Saturday night as she plays TCU (15-12, 7-9 Big 12) at 7 p.m. on “Senior Night.”

“No I can’t do that,” Davenport said as she laughed, adding that fellow senior center Imani Boyette “probably will, you know she’s a very emotional person.”

Davenport, Boyette and senior guards Celina Rodrigo and Brady Sanders came in with head coach Karen Aston four years ago. In their first season together, they finished with a 12-18 record.

“Every time we turn around we are doing something that has never been done,” Aston said. “It’s a lot to them, and it’s a lot to our team that we are accomplishing things on a daily basis that haven’t been done in ten years.”

While each of the seniors contributes to the team in their own way, Aston said they all play a huge part in the team’s overall success.

Rodrigo has been the starting point guard for all four years and anchor of the backcourt. Davenport is also a four-year starter and according to Aston, always guards the other team’s best offensive player. Boyette, too, has been a regular starter and nearly averages a double double.

Sanders, who has seen her minutes decrease since last season, has been a key contributor off the bench, averaging 2.5 points and about one assist per game. The former starter said she prepares the same, regardless the amount of minutes she plays.

“This is really all the basketball I have left so whether its reps in practice or minutes in a game, I value them the same,” Sanders said. “For me, it’s not hard whether I play one minute, thirty seconds or twenty minutes, it’s all the same to me.”

Like Sanders, Rodrigo realizes her time is almost up, but can’t believe how fast the four years flew by.

“I can’t believe I’m a senior already,” Rodrigo said. “I’ve enjoyed every moment. I’m just proud to be out there and represent Texas.”

The seniors still have goals to reach and their legacy is unfinished. A potential Big 12 championship and long NCAA Tournament run still hang in the balance. But Aston said regardless of what happens from here on out, they’ve left an impact on the program.

“This group never wavered from wanting to make a difference at Texas, and I think that’s going to be something that they will be really proud of,” Aston said.