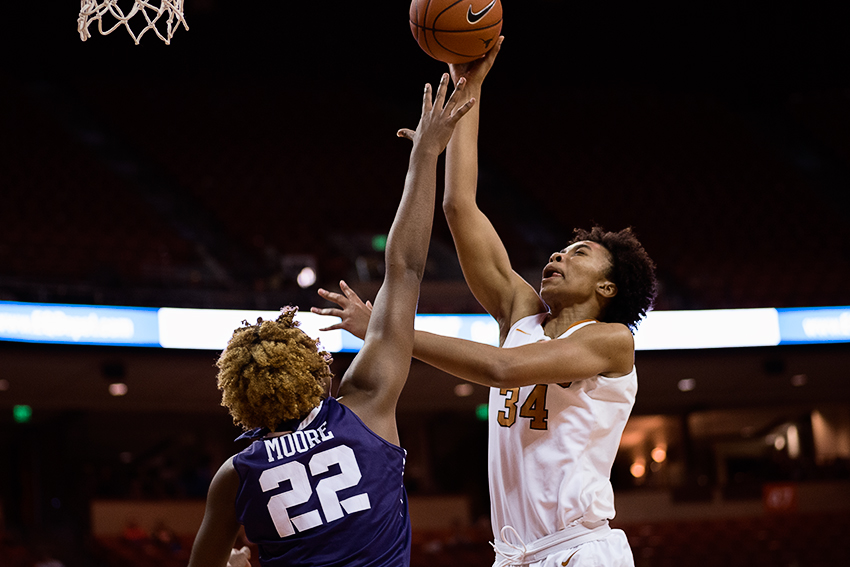 Head coach Karen Aston said that her seniors would make sure they refocused after losing for the first time all season to Baylor on Jan. 17.

She added that she didn’t want the one loss to turn into two or three, leaving the Longhorns without a shot of capturing a conference championship.

Over a month later, Texas has only lost one other game, and sits one game behind Baylor in the Big 12 standings. The two teams meet again tonight in Waco.

Texas meets Baylor after a 71-58 victory over TCU on Saturday. Aston said that the quick turnaround between games will tell her a lot about how her team will play in the NCAA tournament.

“This is tournament atmosphere,” Aston said. “That’s what the regionals are like. You’re going to get a day of rest then play another team 48 hours later.”

The seniors that Aston said needed to refocus after the 80-67 loss to Baylor have done just that. They were honored before Saturday’s win against TCU, but senior center Imani Boyette said the senior night honors shouldn’t be the highlight of her season.

“To be honest, we got another game and it isn’t over,” Boyette said. “We are nowhere near over, [and] senior night is exciting for the people who don’t have any more games after, so I’m good.”

Since then, No. 4 Baylor has rattled off 16 straight victories, and is on the verge of claiming another regular season Big 12 Championship outright — a goal that Texas senior guard Celina Rodrigo has been eyeing all season.

“This is something that we have wanted to accomplish,” Rodrigo said. “If we are able to go out and do that, we would be extremely happy and happy to accomplish one of our goals.”

Texas has already passed the high water mark for wins during Aston’s tenure, and the Longhorns’ head coach knows how special this year’s team is.

“Every time we turn around, we are doing something that has never been done,” Aston said. “We are accomplishing things on a daily basis that haven’t been done in ten years.”

Boyette puts the win totals and records aside for now; she said that this year’s senior class isn’t done building its reputation.

“I still think we have a long way to go if we are trying to have a legacy,” Boyette said. “But I think we are in the right direction.”