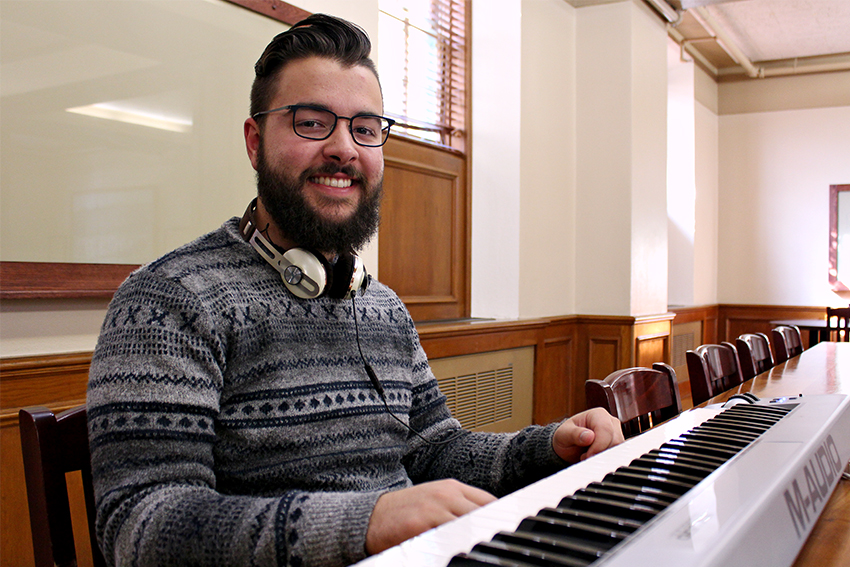 With a keyboard at his side and headphones clasped over his ears, Jared Marxuach hits a sequence of keys producing a melancholic flow of piercing notes. After looping the sequence back and reflecting on the particular movie scene in mind, he finally sits content.

Radio-television-film freshman Marxuach never thought he’d be in college creating film scores with a keyboard. Now in his second semester, Marxuach is highly sought after by student filmmakers belonging to Delta Kappa Alpha, UT’s film fraternity, because of his unique musical style that blends his classically-trained background with electronic, modern influences.

“I was always talented and had a knack for music, but it wasn’t until my junior year of high school that I decided I wanted to go into scoring films,” Marxuach said. “For the longest time, the interest was there, it was just the outside noise that made me reluctant to choose a musical career.”

Because of his academic success in high school, Marxuach said he was advised to go into any career he liked, except music. His friend, biology freshman Lizzy Schattle, said she doesn’t blame Marxuach for initially being reluctant to pursue a career in music.

“When a person like Jared, who is so musically gifted, is told the only pathways to success are being a doctor or lawyer, of course he’s going to be a little discouraged,” Schattle said.

The turning point for Marxuach was when he first watched “The Social Network,” a film he said exhibited the limitless opportunities for incorporating music into the visual medium.

“‘The Social Network’ made composing cool because it allowed for anyone who didn’t have an orchestra at their disposal to create a film score,” Marxuach said. “So, for a guy like me, who only has a keyboard, computer and headphones, it was inspiring. I figured then that although it’s tough to be a successful [film] composer, it would be a really neat career to blend two things that I love.”

After much deliberation, Marxuach said he finally pursued his dream of being a film composer, deciding to attend UT and enroll in the radio-television-film program.

Last semester, he joined Delta Kappa Alpha to meet filmmakers. There, he met radio-television-film junior John Monroe, who offered him a scoring opportunity for his film, “Expecting,” about a couple struggling with a failed pregnancy.

Monroe said Marxuach was able to perfectly convey the sad, ominous tone of the film in his score.

“[Marxuach] had elements in the score that I never would have thought to tell him to put there,” Monroe said. “I feel like we are both people who want to understand the story on a visceral and detailed [level] in order to bring what is needed to the work.”

Having successfully added an extra emotional layer to the story with his score, Marxuach said he was confident he had chosen the right career path.

“When John came back to me with such positive feedback on my work, especially since I had never scored a film, that was probably the moment where I decided this was what I was going to do with my life,” Marxuach said. “I realized I have the ability, now it just depends on how hard I work.”

Although his teachers’ discouragement was initially tough on him, Marxuach said it ultimately led him to the route he is on now — one similar to paths taken by previously-successful film composers.

“The film composing greats were able to get past their own initial doubt and hesitation,” Marxuach said. “They all had the talent, but ultimately, it’s about who’s confident in their abilities and who can bring something new to the table.”