Texas has no answer for Kansas, drops senior night 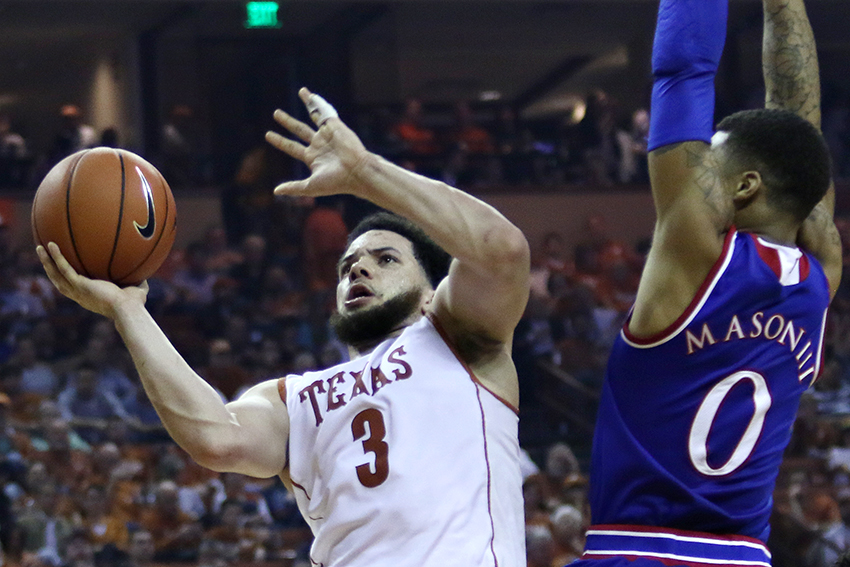 This night was far from normal.

The only thing that was normal was the one thing that no one wanted — the outcome. No. 23 Texas had no answer for the No. 1 Kansas Jayhawks, falling 86-56 on senior night, dropping to 8-27 all time against Kansas and 0-for-9 against AP No. 1 teams.

“I’ve seen senior nights go both ways; tonight it went the wrong way,” head coach Shaka Smart said. “And I’m not talking about the result — I’m talking about in terms of what it did for us psychologically.”

After the senior night pageantry and the pregame pyrotechnics were through, the sellout Erwin Center crowd had an electricity about it. But when the game tipped off, it wasn’t what the seniors, or anyone, hoped.

Texas began the game 0-of-14 from the field as the Jayhawks ran out to 15-0 lead. A floater from senior guard Javan Felix finally got the Longhorns on the board more than six minutes into the contest.

The other seniors answered the call as well, combining for 16 first-half points, but the Jayhawks shot 63.3 percent in the first half and bombed two 3-pointers in the closing minutes to take a 47-23 lead into the break.

“We didn’t come out and guard tonight,” Felix said. “Just plain and simple.”

The seniors attempted to spark something and scored the first six points of the second half to pump some much-needed life into an otherwise dead arena.

But it was evident who was the Big 12 champion and No. 1 team in the land. The Jayhawks shot a sizzling 64 percent from the field for the game and had three players in double figures.

In cruel irony, it was Kansas’ senior star that stole the show. Forward Perry Ellis, the man who has been the nemesis of Texas’ seniors for four years, had 20 points and consistently sucked the life out of the Erwin Center crowd.

Once the Jayhawks went up 65-34 with 13:08 remaining, the fans started making their way to the exits.

The seniors have a chance to make postseason noise, but the chance to beat Kansas on the Erwin Center floor on senior night won’t return.

“It’s very tough. For me, the most important thing is not to dwell on it,” senior center Prince Ibeh said. “Realize it’s not the end of the season.”

But as history suggests, it was just a normal outcome against Kansas on an abnormal night.