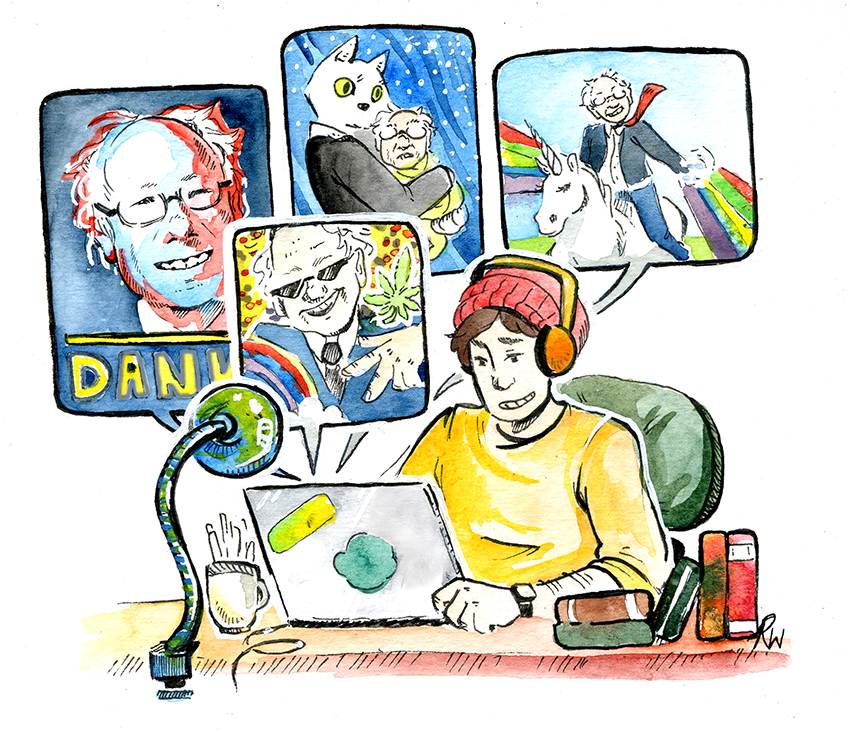 Are you a single Democratic socialist looking for a date who shares your commitment to reducing wealth inequality? If so, there is a place for you: www.berniesingles.com — the ideal destination for those looking to align their romantic goals with their political ones.

While Bernie Singles is not exactly political activism, it’s not a joke either. The site features a space dedicated to donating to the campaign. The slogan “Meet other people who understand the world!” appears in large text.

Bernie Singles is just one instance of the growing trend of what can be called the “meme-ification” of Bernie Sanders, with Sanders himself becoming viral content. It’s hardly the biggest. The hub of the meme-ification effort is a Facebook page titled “Bernie Sanders’ Dank Meme Stash,” or BSDMS. BSDMS currently has over 300,000 members dedicated to creating “dank” memes in support of Sanders’ campaign. It’s hard to log on to Facebook these days without seeing an image of Sanders and Hillary Clinton side by side, comparing the candidates’ views on some
non-political subject. Sanders always has a nuanced, authentic view, while Clinton is depicted as naïve and/or pandering.

The Internet has become a bastion of support for Sanders, and the advent of political memes has bolstered his image. This is largely why Sanders is popular among the youth demographic, who create and understand the meaning behind the viral images. Memes have become one of the most effective ways to showcase Sanders’ persona as being in touch with the common person.

Memes are not, however, the most effective way to facilitate effective political discussion. They rarely give any insight into the candidates’ platforms. At best they touch on the candidates’ personalities, but often they are just cheap jokes at Clinton’s expense.

The real danger of memes is that memes and other forms of viral media risk turning a politician, in this case Bernie Sanders, into the leader of a cult of personality. The “Bernie bro” phenomenon provides evidence of this hazard. Bernie bros are those who have fallen into the trap of thinking that only the ignorant or corrupt support Clinton. They see Sanders as a divine figure, pure from the worldly corruption that has infected every other successful politician since George Washington. This threatens to undermine the democratic process by elevating the politician above their policy. Memes propagate this threat by limiting discussion to one liners.

So the next time you see a Sanders meme on your Facebook timeline, remember that it’s OK to laugh. But maybe you should think twice about clicking share.