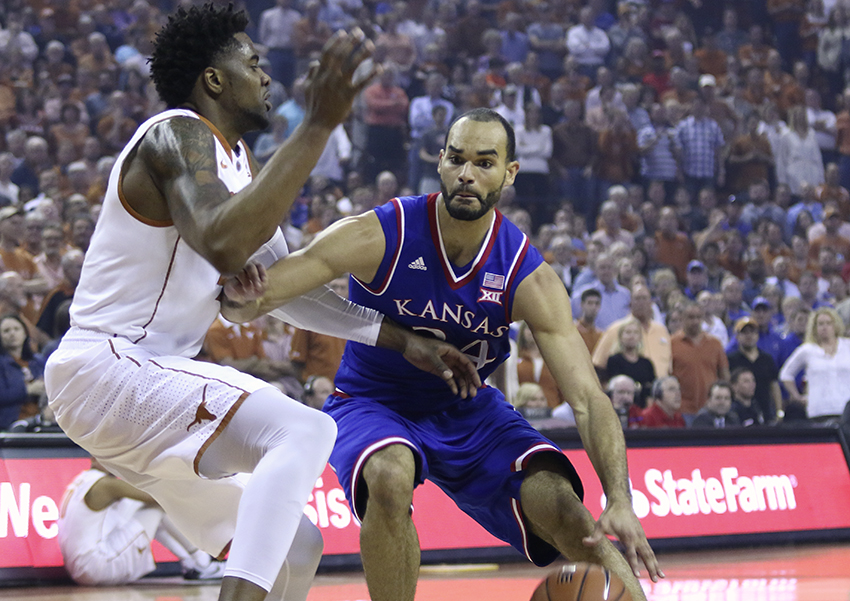 Before they stomped all over the Longhorns on Monday night, the Jayhawks had a little bit of celebrating to do.

Kansas wrapped up a share of its 12th-straight Big 12 title with a 67-58 win over Texas Tech on Saturday, and the team pulled all the stops to celebrate the achievement.

The players took turns cutting down the net, similar to that of the regional and NCAA champions, and brought out all 12 Big 12 championship trophies to display at midcourt.

“It’s an amazing accomplishment — the continuous success,” senior forward Perry Ellis said. “Thinking about all the hard work and all the hours you put in, and then it all pays off in the end. It’s just a relief and an exciting time.”

The Jayhawks’ 12th-straight conference title places them second in NCAA history behind the UCLA Bruins, who won 13 consecutive Pac-10 titles in the 1960s and 70s.

TCU hasn’t had many things to celebrate this season, but sophomore guard Malique Trent earned some conference bragging rights, taking home the Big 12 Newcomer of the Week award on Monday.

Trent scored a career-high 25 points, including 19 second-half points, in a loss to Baylor on Saturday. He shot 45.8 percent from the field in two games last week along with five steals.

West Virginia senior guard Jaysean Paige grabbed the conference’s player of the week award after lifting the Mountaineers to two wins last week. Paige posted a career-high 34 points against Iowa State on Feb. 22, the most for a non-starter in school history. He also scored 17 points in a win against Oklahoma State on Saturday.

Hours before taking Texas to task, Kansas jumped back into the No. 1 spot in the AP Poll on Monday.

The Jayhawks took advantage of Villanova’s 90-83 loss to Xavier last week to take over the top spot. Kansas previously held the No. 1 spot for two weeks in January before falling as low as No. 7.

Oklahoma fell three spots to No. 6 after allowing a 22-0 run by Texas in a 13-point loss to the Longhorns in Austin on Saturday. Iowa State had the worst fall of any of the Big 12 teams, dropping four spots to No. 21 after a loss to West Virginia. The Mountaineers, meanwhile, jumped four spots to No. 10.

Baylor held steady at No. 19 while Texas moved up a couple of spots to No. 23 after wins at Kansas State and against Oklahoma.