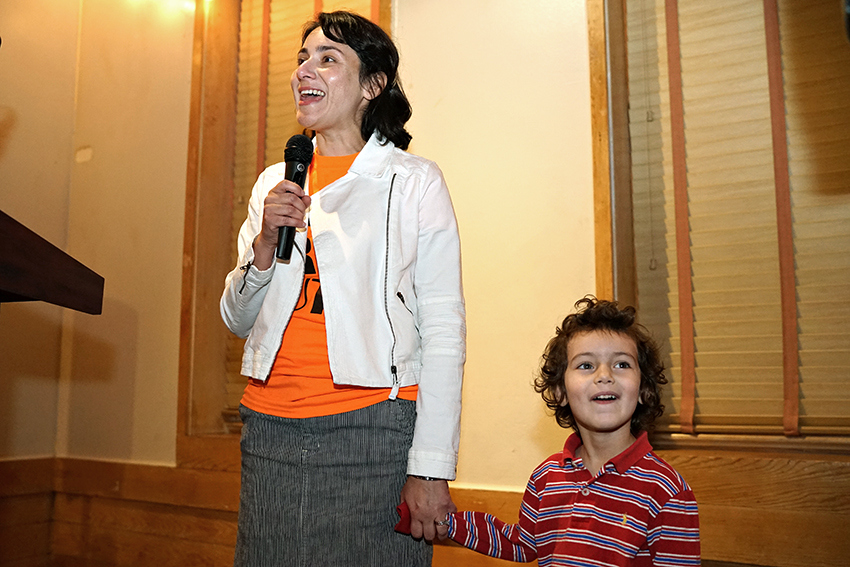 Gina Hinojosa was elected as representative for Texas House District 49, which encompasses UT and West Campus, with a 58 percent vote Tuesday night.

The trustee and former president of the Austin Independent School District Board will replace incumbent Elliott Naishtat, who is retiring because of health reasons. Hinojosa said she will focus on reforming the education and transportation systems and protecting the environment. Hinojosa’s supporters gathered at Scholz Beer Garten to watch the election night results.

Naishtat, who attended the watch party, chose to remain neutral throughout the race. Still, Naishtat said he is happy with the outcome and hopes his successor will follow in his footsteps.

“While I maintained my policy of staying neutral … I’m very pleased Gina [Hinojosa] is apparently the winner,” Naishtat said. “I hope she will look at the issues I focused on in the past years. I fought for the rights of … vulnerable, disenfranchised, disadvantaged populations.”

Of the seven Democratic candidates vying for HD 49, Hinojosa is the only one who has held an elected office. Rebecca Cobos, an independent legislative consultant, said Hinojosa’s experience set her apart from the other candidates.

“She has a successful record [at AISD],” Cobos said. “To have that background, she’s a mother, a professional woman and I feel she speaks for a range of diverse people. I think she’ll do a good job.”

Democratic representatives should be willing to reach across the aisle on certain issues, Hinojosa said.

Hinojosa, who graduated from UT with a Plan II and government degree, believes public universities should have the same right as private universities to opt out of campus carry.

Hinojosa said she hopes to be appointed to the Public Education committee to increase representation from Central Texas Democrats. Hinojosa also said she would like to be a part of the House State Affairs committee.

“We need meaningful oversight of our contracting with agencies,” Hinojosa said. “There have been problems with accountability, transparency and wasteful spending that we need to make sure we’re monitoring carefully.”

“I think she’ll be a much-needed voice of reason considering how insane it is,” O’Hara said.

Hinojosa said the downside of running was the time spent away from her family, but the experience overall has been largely rewarding.

“My most favorite has been really spending time with the community … and the passion that people in this town have on all sorts of issues,” Hinojosa said. “Reminds me of why I fell in love with Austin in the first place.”