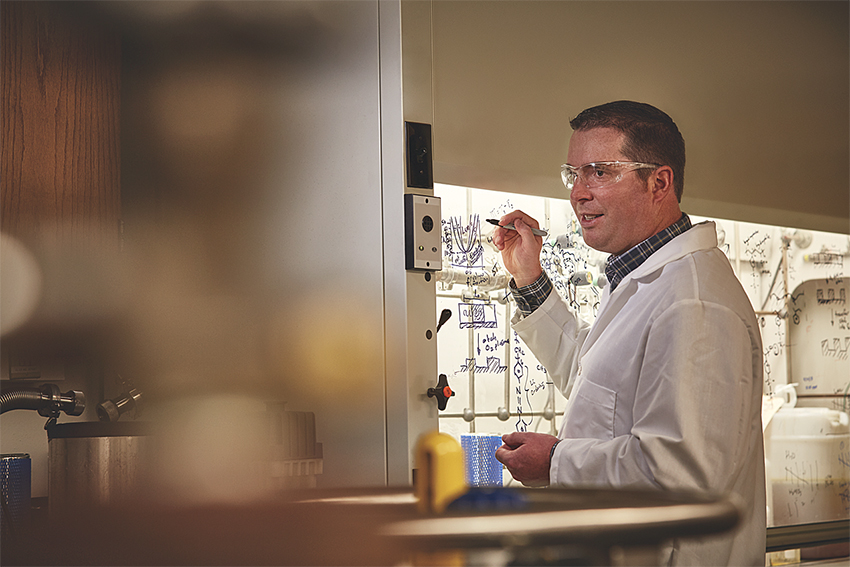 Courtesy of the Welch Foundation

The Welch Foundation awarded Ellison $100,000 Monday for his achievements in chemical research.

“Dr. Ellison is … a case in point,” Tate said. “His success in developing fundamental new knowledge and applying it in practical ways that make a real difference in human lives is truly amazing at such an early point in his career.”

Ellison has been a professor in the Cockrell School of Engineering for almost eight years. In this time, he has also led the Laboratory for Nanostructured Polymeric Materials, which focuses in the design, synthesis, characterization and processing of nanostructured polymeric materials.

“We try to use what’s known about how these nanaostructured materials form,” Ellison said. “Then we try to design and synthesize these materials such that they display properties we want.”

Peter B. Dervan, chair of the Welch Foundation’s Scientific Advisory Board, highlighted Ellison’s interdisciplinary approach to chemical research as a quality that distinguishes him from other scientists in the field.

“He has excelled at all stages of nanostructured materials research, from conception to synthesis to characterization — he can do it all,” Dervan said.

Throughout his career, Ellison has emphasized practical applications in chemistry. His approach has given his projects a palpable potential to impact people’s day-to-day lives, according to chemical engineering professor C. Grant Willson.

His team worked to apply a new nontoxic nanofiber manufacturing process. Companies can use this method commercially in areas such as tissue regeneration, drug delivery, filtration and protective clothing. They also created a nanotool that could potentially increase the memory capacity of hard drives and developed the first environmentally safe flame retardant.

“As a chemist, you like to make new molecules, maybe in ways you haven’t seen done before,” Ellison said. “And as an engineer, you like to do things that impact society, that impact people, that see the light of day.”

The Hackerman award is meant to honor Ellison’s dedication to finding answers to complex questions, as well as his commitment to educating the next generation of scientists, according to Tate.

“Often, your very best and most outstanding researchers are in fact your most fabulous teachers,” Dervan said.

Ellison said his most important role is to teach and train students.

“I love being a teacher,” Ellison said. “It’s probably the most satisfying thing that I do.”

“He has been positive, thoughtful and always dedicated to supporting his students and their research,” Katsumata said. “I am very lucky to work with someone who has exceptional abilities in both research and mentorship.”

Sunshine Zhou, chemical engineering graduate student, said she has been very fortunate to have been able to work in Ellison’s team.

“Dr. Ellison is a younger professor, so he has a lot of energy, new ideas and enthusiasm for his work,” Zhou said. “His energy is contagious, and I am always motivated and excited about my work after a meeting with him.”