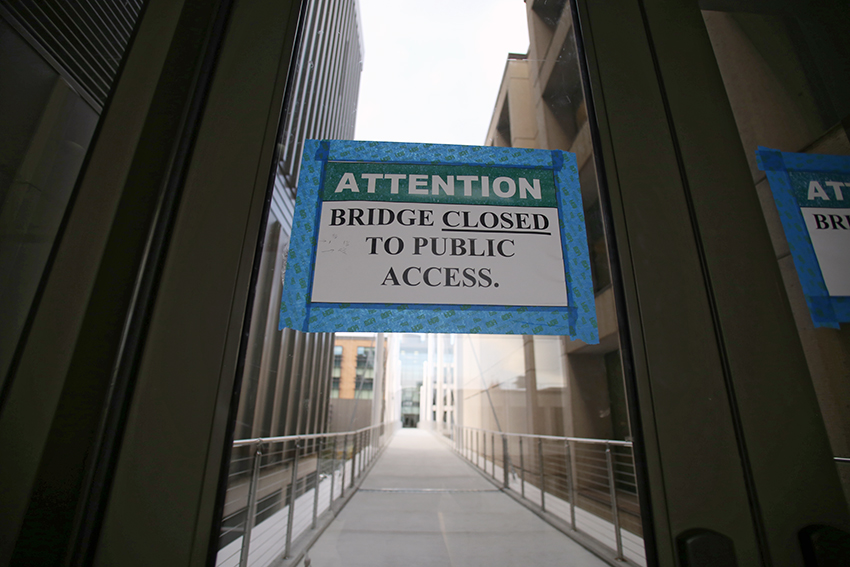 The newly constructed Moody sky bridge will not likely open until after spring break because of needed finishing touches, despite a projected Feb. 26 opening date.

Unfinished work on the bridge’s northern entrance in the Belo Center for New Media and an inspection showing several places on the bridge that needed paint touch-ups will delay the opening, Bob Rawski, director of Austin Region for the UT System Office of Facilities Planning and Construction.

“Rather than open it up and then have partial closures to do this, we felt it would be better to just delay the opening a bit,” Rawski said, “Because it’s so visible, so important, we want it to look good.”

Potentially adding to the delay is a plan to add a protective coating to the surface that was initially tabled for budgetary reasons but is being reconsidered because of savings during construction, Rawski said. The coating would give pedestrians better traction when walking on the bridge during wet conditions and extend the lifespan of the bridge’s surface.

Although the bridge’s opening has been delayed, kinesiology senior Daniel Veritz said he thinks the bridge will be useful and add to the aesthetics of the communication school.

“I think [the bridge] will make it a lot easier for people to cross and facilitate traffic flow a little better,” Vertiz said. “It’s [also] valuable as far as adding architecture to our school.”

“Three million dollars is a hefty amount that could’ve been used for something that would directly benefit more people — especially students,” Barthold said.

Barthold said she thinks students will underutilize the bridge.

“In the end, it’s going to be used mostly by professors who go between both buildings,” Barthold said, “I think the majority of [students] won’t go back and forth like it’s intended to be used.”

The bridge’s cost, which was provided specifically as part of the Moody Foundation’s $50 million dollar gift, will be worth it because of growth in the college, Rawski said.

“We’re pretty confident that the utilization will be high enough to justify this expenditure just in terms of students, staff and faculty going back and forth,” Rawski said.

While the Moody College conducted informal observations of foot traffic in 2014, the college would not confirm whether they were planning a post-construction usage study.