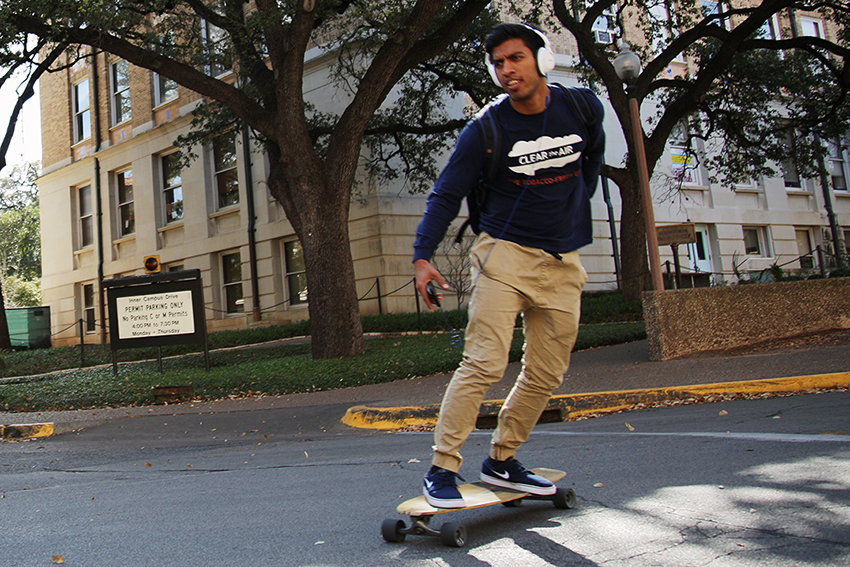 Skating to class is a popular form of transportation among students, but recent UTPD reports of criminal mischief involving skateboards warn students to only use their boards in permitted contexts.

While the University allows the use of skateboards and longboards as a transportation method on campus, UTPD Officer William Pieper said performing stunts and tricks on campus property is prohibited because of injury risks for the skater and potential damage to University property.

Pieper said skaters could be given citations or, in some cases, be arrested for criminal mischief or reckless damage if they affect property or skate in a prohibited location.

“When they do perform their stunts on benches or handrails and jump off of walls, curbs [and] trash cans, it causes damage,” Pieper said. “It chips and grinds down the paint and causes dark marks along the side, which is criminal mischief.”

Skating in all its forms was banned on campus until Parking and Transportation Services revised its policy to allow skaters access to the same areas as bikers in September 2012.

Skateboards, skates and scooters are restricted in buildings and garages as well as on sidewalks, staircases and ramps, according to the Parking and Transportation Services website.

According to the website, trick riding is defined as movements causing the wheels of the board to be deliberately removed from contact with the surface in a repetitive procedure.

Pieper said skaters using campus property for trick practice typically occurs in the evenings or on the weekends when the area is less crowded. He said buildings such as the Blanton Museum of Art or the West and Main malls are popular locations for this type of activity to occur.

Undeclared senior Tomi Olubeko said he rides a longboard around campus to get to class because he believes it is more convenient than walking or biking. He said he enjoys using his board for tricks and typically practices in parking garages, but rarely on campus.

“Usually I stay off campus [while tricking] because of population,” Olubeko said. “[Getting a citation] has honestly never been a concern to me because I don’t really see a situation in which a longboard can cause a lot of property damage.”

Longboards are used for coasting and are more adaptable to wherever a skater is riding, while skateboards are more conducive to practicing tricks. Pieper said he has especially seen an increase in the prevalence of longboards since the campus ban was lifted.

Texas Downhill, a registered club at UT, is a longboarding organization that teaches skaters about the boards and occasionally competes in races.

“There’s a stigma against skaters, whether they ride a penny board, skateboard or longboard, so we are constantly telling people to be safe,” Cassin said. “The main problem we face is prejudice from law enforcement and our peers.”