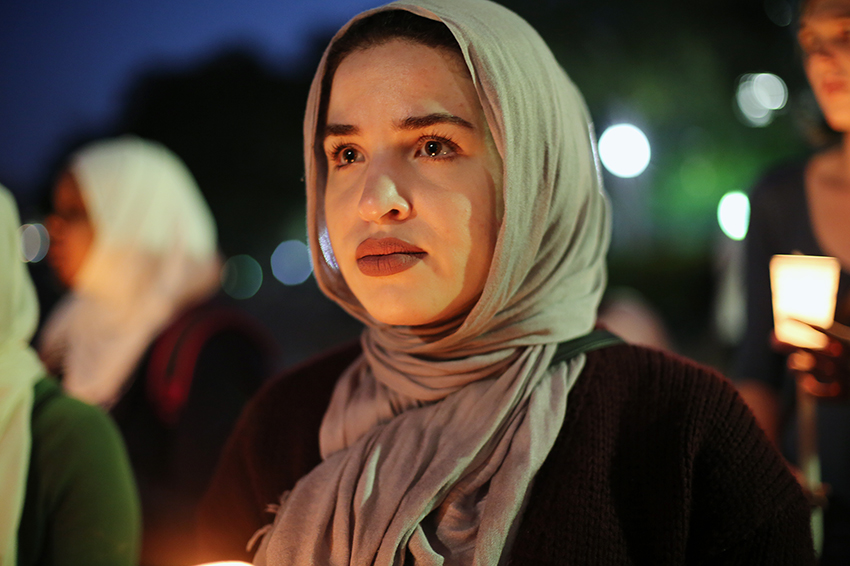 Candles illuminated the steps of the UT tower as approximately 50 people gathered to mourn the loss of three black and Muslim men, Adam Mekki, Mohamedtaha Omar and Muhannad Tairab, who were shot, execution-style, on Feb. 24 in Indiana.

The Palestine Solidarity Committee hosted a vigil last night commemorating the three men. Committee members passed candles out as members from the organization and other groups recited poetry, discussed discrimination and talked about what they felt was a lack of acknowledgment by the media in the wake of the shooting.

Courtney Luke, African and African diaspora studies senior, spoke at the vigil. Luke, a black student, said the incident forced her to reflect on the reality that racial and religious discrimination is persistent in today’s society.

“I cannot imagine losing my brother, but everyday I am forced to imagine his death,” Luke said. “I see his lifeless body everywhere; it is on the news, it is on flyers across campus, it is on posters. I see his corpse hanging in my dreams.”

Paige Ingram, a 2015 graduate in Middle Eastern studies who is a black Muslim, said she has experienced discrimination because of her mixed heritage.

“I was a first-year student and a [Muslims Student Association] student was basically, like, ‘Oh you’re the ghetto hijabi,’” Ingram said. “I’m from the [suburbs]. You know it’s things like that that kind of make it difficult to fully embrace your blackness and fully embrace your Islamic identity at the same time without feeling like an outsider or even being fully ridiculed.”

International relations senior Bennet Yousuf said she feels that phobia and racism exist because of fear and lack of knowledge of other cultures and religions.

“I think that fear breeds hate,” Yousuf said. “I think misunderstanding leads to that fear. Not knowing the people around you and being in an environment where it’s encouraged to hate and to fear the people that are not like you, that emboldens people to act on that.”

Yousuf said she doesn’t feel that there are any immediate solutions to racial discrimination.

“I think it’s hard to say what it would take to fix this problem in society,” Yousuf said. “As you can learn from speaking with a lot of black people, Muslim people, with people who fall into both categories, you’re kind of taught from an early age to be able to fit in, to be an American while being black [and/or] Muslim and to keep your head down and to do your work.”