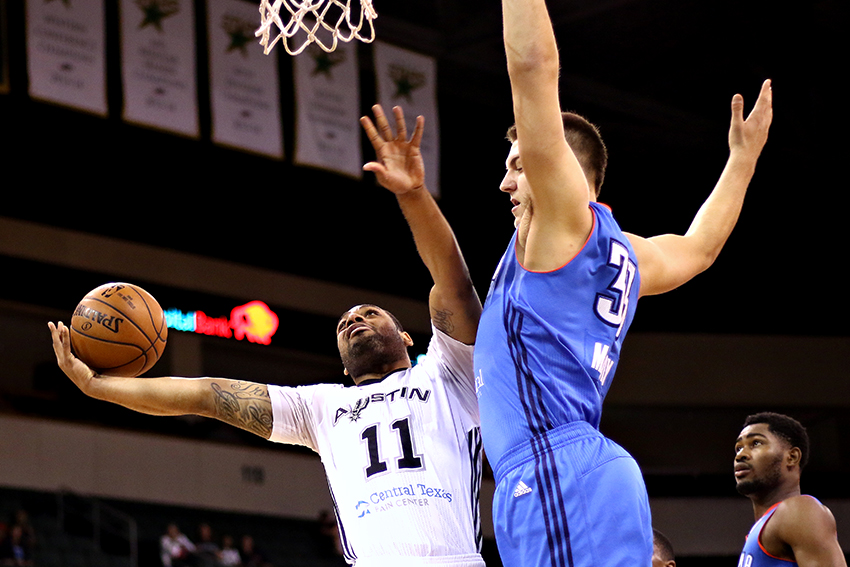 Near the beginning of the fourth quarter, Austin Spurs shooting guard Brandon Fields sunk a three-pointer from the top of the arc to propel the Spurs an 11-point lead. The Spurs never relinquished the double-digit lead following that shot.

Fields, who was traded from the Idaho Stampede to the Spurs on March 3, debuted for his new team to beat his former team 103-89 — Austin’s eighth-straight victory over Idaho — on Sunday afternoon.

“It was tough. I built a bond with those guys,” Fields said. “But [the Spurs] are my team. And my love is for the team that I’m on. It’s a fun time playing with these guys. Sometimes these guys overpass and that’s good because you get open looks, and it’s easier basketball.”

Before Fields’ three-point shot, neither team held a lead larger than nine points in a tightly contested game. The point differentials after the first three quarters were two points, one point, and one point, respectively.

The Spurs struggled from the 3-point line to begin the game, missing their first eight attempts. Idaho countered that performance by converting on eight of their first 11 shots from beyond the arc.

But the script quickly flipped. Idaho missed 13 consecutive three pointers to end the game, and Austin made six of their final nine treys. The Spurs actually outshot the Stampede 35.3 percent to 33.3 percent on three-pointers.

“We were making sure that the right guys were going over screens and not getting caught going under,” head coach Ken McDonald said. “We did a better job in the second half, making them shoot harder threes and the percentages caught up to them.”

The Spurs stood firm during Idaho’s shooting streak. They never trailed by more than seven and stayed in the game by playing aggressive offense, drawing fouls near the basket. The fouls translated to points, as Austin hit 13 of 14 free throws in the first half.

“I didn’t sense any panic with the guys,” McDonald said of his team’s performance in the second half. “We physically were able to control some things on the rebounding front and our help-side was there. We put some pressure on them driving the ball as well.”

Orlando Johnson, described as a “physical and reliable” player by his coach, returned after a wrist injury on Feb. 20. He led Austin with 21 points and nine in the fourth quarter.

“His leadership is really important to our team,” McDonald said after Johnson’s resurgent game, where the Spurs outscored the Stampede by 23 when he was on the court.

Johnson, who scored a game-winning shot in his last outing, has driven Austin to a 23–14 record. His Spurs are now preparing to enter a four-game road trip, which may be their toughest stretch left in the season before playoffs begin in April.