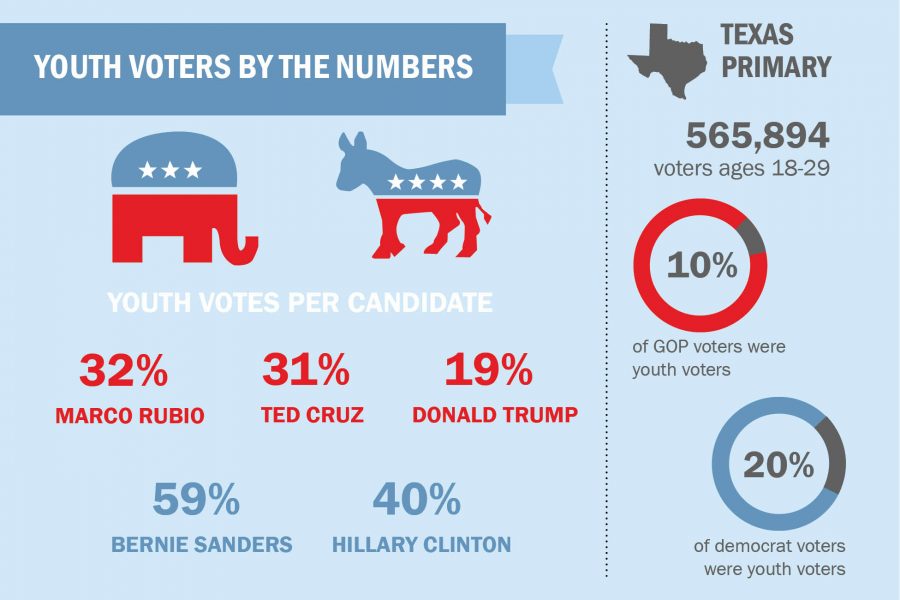 “With a number of strong showings across many states, young people continued this year’s trend of high participation that rivals the numbers from 2008, when youth turnout in some cases tripled that of previous years,” the report said. “And in both parties, young people are still not rallying around the front-runners.”

“Young people hold very different views from their parents on issues such as marriage equality,” Albertson said. “It’s not just social issues, though. Young people are more suspicious or are opposed to the war in Iraq and Afghanistan that was so strongly associated with the Republican Party.”

In Texas, exit polls showed that young people in the Republican primary narrowly supported Marco Rubio over Ted Cruz. In the Democratic primary, they supported Bernie Sanders over Hillary Clinton by a 19-point margin. Neither of the young people’s favored candidates won the Texas primaries.

“Sanders seems to not represent the institution, and that might be what he’s tapping into,” Felicia Sullivan, a senior researcher at the center, said. “[Cruz and Rubio] might have more people on their staff or in their communication network. Young people do respond when there’s more one-on-one contact when campaigns reach out to them.”

When asked why young people have pulled away from the front-runner in the race, Robert Guerra, communications director for College Republicans, said Donald Trump doesn’t target youth voters.

Young people made up 20 percent of voters in the Democratic primary, while they made up 10 percent in the Republican primary.

“I think that there’s a higher percentage of young voters in the Democratic Party because Democrats prioritize and actually address issues that affect and matter to young voters,” said Maliha Mazhar, government senior and communications director for University Democrats. “Democrats also are more inclusive, accepting  and diverse in general — just like young people in this country.”

“The gap is starting to narrow again,” Sullivan said. “Republicans are doing a better job of capturing youth votes, and the Democrats have lost some. They’re more on par in this election than they have been in the last three or four election cycles.”