Students fundraise for orphans in China 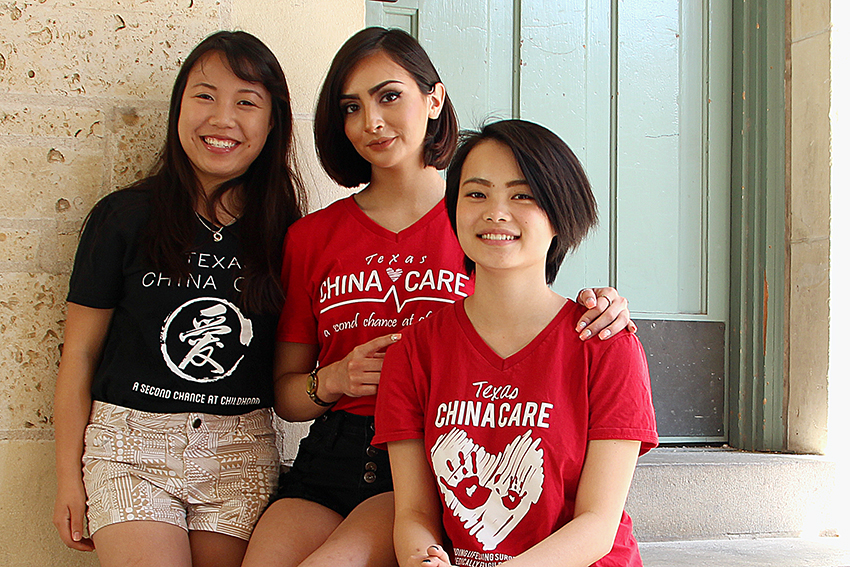 Groups of students line up along the street with signs over their heads that read, “BABY ZHONG NEEDS YOUR HELP.”

From their homes in Austin, Texas, China Care members work to promote equal quality of life for historically disadvantaged children in China through fundraising and community involvement.

Founded 10 years ago, Texas China Care is one of many student-led organizations under the national charity One Sky. One Sky’s orphanages in China nurture young girls and children with disabilities who have been put up for adoption because of China’s former one-child policy.

China Care president Catherine Vu, an international relations and global studies senior, said One Sky orphanages emphasize one-on-one attention between orphans and their caretakers, something Chinese orphanages often lack. Their method has served as an example for orphanages around the country.

“[The] idea was that love was really the key to help these children progress and develop,” Vu said.

“We hold signs with orphans’ pictures on them and just scream at cars to help donate and raise awareness,” Vu said. “We’re reaching out to the Austin community, even if for a brief five seconds when that person is sitting at the red light.”

“There’s always these people that are just walking by, and they pull out a dollar bill, and they’re like, ‘This is all I have,’” Perez said.

All the money goes directly to educational, nurturing and rehabilitation programs for orphans in China. This year, Vu said Texas China Care is sponsoring two orphans.

“Throughout the year, One Sky sends us two or three updates on how the children are progressing,” Vu said. “If they’re going through rehabilitation, they’ll tell us, ‘He was able to hold the nanny’s hand and walk with them a little more than last week.’”

The programs focus on integrating Chinese orphans back into society, since not every child gets adopted. Perez said the program is also important for children who have been adopted and are currently living in the United States.

International relations junior Raelyn Beck was adopted from China at six months old. As a child, Beck said she was involved with an organization called Families with Children from China (FCC), a group Texas China Care works with.

FCC was established by a collection of parents to help their adopted children retain their Chinese culture and identities. Beck said children learn about and celebrate traditions like Chinese New Year and the Chinese Moon Festival while building strong mentor relationships with the volunteers.

“I really like giving back to the community that I used to be a part of — and still am a part of, I guess — and seeing how much the adopted community has grown,” Beck said.

The organization also enables the children to develop a peer community, Perez said.

“Usually [the children] are just the one Chinese kid in their family, with white brothers and sisters, and it’s kind of a weird disconnect for them, like something is not right,” Perez said. “What FCC does is it introduces them to people that have their same story and culture and who look like them.”

Perez said she hopes the organization will bring awareness to the consequences of China’s one-child policy and inspire people in Austin to provide support.

“The founders of One Sky literally adopted a kid and cared so much that they flew [to China] and started to run their own orphanage,” Perez said. “In the future, maybe someone will hear about [Texas China Care] and want to help adopt in China.”