“Shardlight” relieves the glory of older adventure games but, does little to make itself stand out 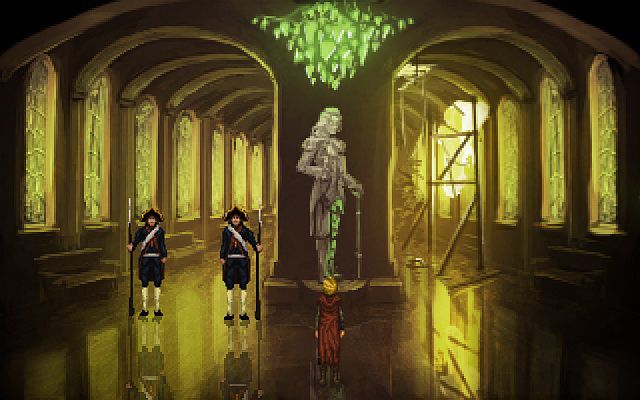 “Shardlight” is a point-and-click adventure set in a post-cataclysmic world on the brink of further upheaval. The game is heavily based on retro adventure games, focusing its efforts on an intriguing story complemented by solid visuals and music.

The game takes place in a bombed-out city controlled by a literally faceless oligarchy, void of life’s basic necessities and plagued by a mysterious disease. The cure for this illness is only afforded to “lottery workers” who perform jobs that enter them in a lottery where the winner gets the cure.

The protagonist, Amy Wellard, is a lottery worker who gets drawn into a downward spiral of intrigue as she uncovers information about the oligarchical government and the disease. Unlike traditional adventure games which feature blank slates as protagonists, “Shardlight” gives Amy a past, personality and existing connection with the world around her. Characters encountered throughout the game have established relationships with Amy, helping foster a connection between the player and the protagonist, rather than just having her be a puppet for the player to use.

The narrative doesn’t rely heavily on exposition or deep symbolism to drive home its message. This isn’t to say the game’s plot isn’t well written or lacks depth: “Shardlight” is blunt in telling the player this is a game about class and human behavior within a world of chaos but does a thorough job of examining the subject it chooses to address.

The world of “Shardlight” is inventively disturbing. Allusions to classical European ideas of aristocracy are seen in the lavish homes of the oligarchy, which feature expensive decorations straight out of 16th century London — a stark contrast to the apocalyptic wilderness found outside the upper-class walls.

The sadistic aristocrats who command the government adorn themselves in porcelain gas mask that mimic the powdered-white faces of the Elizabethan era, excellently showcasing the disturbed nature of a world without any unnecessary exposition.

The game’s aesthetic, music and story succeed in making “Shardlight” an emotional, serious critique of society. Staying consistent with its retro feel, complex pixel-art visuals, fluid animations and emotional sound design work together to create a solemn portrait of dystopia.

While the game takes place in an oppressively dark post-nuclear wilderness, it features aristocratic mansions, surrealist dreamscapes and futuristic undergrounds to break up the drab expressionism of a monochromatic wasteland. But as ambitious and well-crafted as the game may be, the gameplay seems to have been given very
little thought.

As with most point-and-click games, gameplay consist of clicking on the environment to gather items to put in your inventory and then using those items to solve puzzles. The problem lies in “Shardlight”’s lack of innovation; puzzles are consistently easy with occasional cryptic puzzles that frustrate rather than reward. Although the point-and-click genre’s strengths generally lie in narrative rather than gameplay, poor puzzle design will inconvenience the player’s progress of
the story.

The game’s plot twist aren’t going to surprise anyone, but “Shardlight” remains a wonderfully crafted experience that tells a tale smart enough to be free from dependency on complex fluff. It truly shines when all the aspects of the game’s design come together to form an absorbing science fiction world.