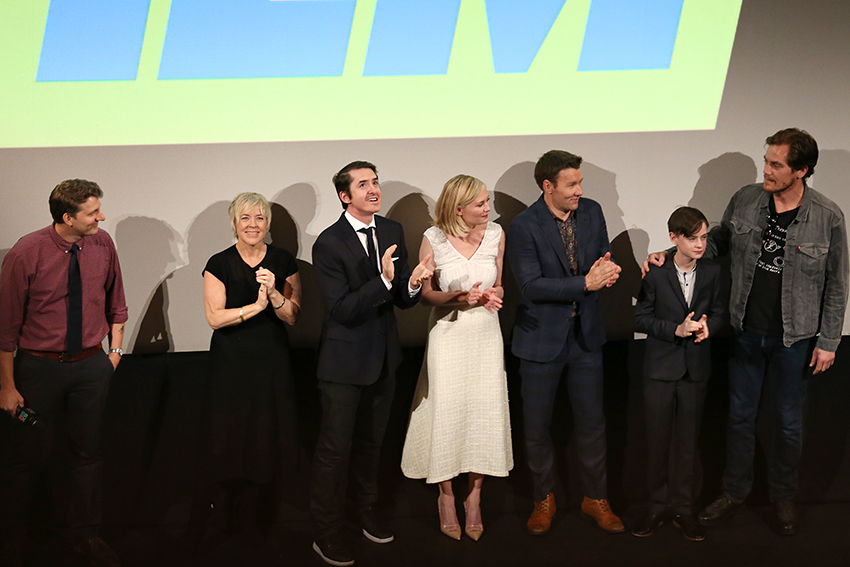 We find Roy (Michael Shannon), Lucas (Joel Edgerton) and Roy’s son Alton (Jaeden Lieberher) holed up in a dark motel room. Roy is packing guns. Lucas is on edge, keeping guard by the door. Alton hides beneath a blanket, reading a comic book. On the TV, a new anchor relays an Amber Alert – a boy named Alton is missing, and Roy is his suspected kidnapper.

Night falls, and the trio zoom off in a weathered car. Who are these people? What are they on the run from? Where are they heading?

Writer and director Jeff Nichols brilliantly hooks us with the immediate mystery, then answers these questions as the story gradually unfolds. We find out that Roy, for unknown reasons, allowed Alton to be adopted by the head of a religious cult (Sam Shepard).

Alton has a mysterious power the cult believes makes him the key to their salvation, and it’s not hard to see why they think so: his eyes glow and cast blinding white light at the most inopportune of times, and he can listen in on radio waves and manipulate physical objects.

We learn Roy, Lucas and Roy’s ex-wife Sarah (Kirsten Dunst), who joins them midway through their journey, are trying to get Alton to a secret location where he’ll meet others like him. They are being hunted by a religious cult, and by FBI and NSA agent Paul Sevier (Adam Driver).

For a science fiction film, “Midnight Special” is unusually subdued. It’s shot like Nichols’ other dramas, and it generally grounds its early proceedings in reality so that we buy into the movie’s more outlandish events, one of which is the terrifying crash of a satellite caused by Alton’s abilities. The climax is a satisfyingly human moment, rather than a violent battle between the three factions, though there are scary moments of violence in the picture. In many ways, “Midnight Special” can be viewed as Nichols’ loving homage to Steven Spielberg’s “Close Encounters of the Third Kind.”

Shannon, who has collaborated with Nichols on each of his four films, invests us in Roy’s plight with his intensity and conviction. Edgerton and Dunst similarly deliver strong performances as unlikely heroes. The adult leads feel genuine and world weary – one can sense the history behind them and their relationships without having seen or heard about them.

But “Midnight Special” is very much Lieberher’s film – like Shannon, he has magnetic eyes and a quiet assuredness about him. He communicates the pain of Alton’s struggle to understand himself and what he’s meant to do, and his work with Shannon sustains the picture.

Like Spielberg, Nichols deals with themes of parenthood. Roy is a loving father, willing to kill to protect his son, and he does everything he can to help him understand who he is. In a touching moment, Alton tells Roy that he doesn’t have to worry about him, and Roy replies, “I’ll always worry about you. I like worrying about you. That’s the deal.”

Nonetheless, Nichols suggests Roy’s role isn’t to be Alton’s guardian forever, that his job is to eventually let go of the boy he cares so much for. The process is difficult and poignant for Roy, who initially rejects Sarah’s worry that taking Roy to the secret location may mean losing him to a higher power.

Nichols also touches on the theological implications of Alton’s gifts, though not quite as thoroughly. The film’s religious cult invites comparisons to the Branch Davidians, and they prove intimidating antagonists who aren’t quite bad guys. Neither is Sevier, who has legitimate national security concerns regarding Alton.

While it opens asking many questions, the ending of “Midnight Special” will leave viewers asking many more. It’ll be up to debate as to who or what Alton really is, and the final shot leaves the film once again shrouded in mystery. But that’s okay, because Nichols’ latest picture is engaging and moving science fiction that understands humanity in even the most inhuman of us all.